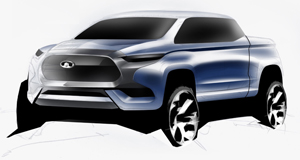 CHINA will soon have a new SUV and one-tonne pick-up platform-sharing twin with Great Wall confirming its next-generation ute will sit on a modified version of the Haval H9 four-wheel-drive wagon, while the interior will also take a step up in refinement.

Speaking to Australian journalists at the Beijing motor show, Great Wall Motors (GWM) Group vice-president of product planning Sam Chen confirmed the new ute and the Haval H9 will share the same production line and come from a new factory being built in Chongqing.

“There is a commonality on the platform, yes … it’s actually a modified platform,” he said.

Competing against the likes of the Toyota HiLux/Fortuner, Ford Ranger/Everest and Mitsubishi Triton/Pajero Sport, the Chinese brand’s offerings differ from their rivals as the SUV version was developed first, followed by the workhorse.

The seven-seat H9 is underpinned by a body-on-frame chassis developed by Haval with a wheelbase measuring 2800mm, which falls just short of the Toyota HiLux’s 3085mm and the Ford Ranger’s 3220mm.

Expect to see features carry over from the H9 to the new Great Wall pick-up such as the all-paw drivetrain, an updated version of Haval’s All-Terrain Control System (ATCS) that enables different driving modes on varying surfaces, electronic differential lock and an eight-speed ZF automatic transmission.

However, at this stage, it remains unclear if the H9’s 180kW/350Nm 2.0-litre turbo-petrol four-cylinder engine will also power the Great Wall ute, but the Chinese car-maker has confirmed more powertrains are in the works.

Mr Chen stopped short of confirming an oil-burner for the diesel-skewed Australian market, but instead revealed the new Great Wall pick-up would sport a less utilitarian cabin.

“In terms of powertrains, yes, we will have a sort of competitiveness in the local market, in terms of updating its appearance and comfortability – it’s also something we’re also working on,” he said.

“This new pick-up that we’re working on, it will have very much an SUV type of interior space, so it’s not so much the old-style typical truck feel anymore.

“You are driving a pick-up and it is very much an SUV interior, so that’s something we’re definitely moving towards.”

Features such as autonomous emergency braking, adaptive cruise control and forward collision warning will roll out to the H9 later this year, which are expected from launch in the new Great Wall ute due internationally next year and in 2020 for Australia.

Haval is also expected to launch its own ute in 2020, with the company confirming to GoAuto earlier this year that it will be offered with petrol, diesel and hybrid powertrains.