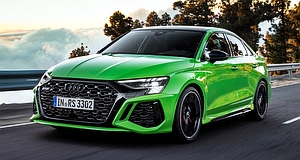 AUDI Australia has released pricing and specification details of its highly anticipated RS3 Sportback and Sedan range. The sizzling 294kW duo is scheduled to arrive in local showrooms from Q2 next year.

Powered by the latest iteration of Audi’s award-winning turbocharged 2.5-litre five-cylinder, the RS3 Sportback and RS3 Sedan will be priced $91,400 and $93,900 respectively (excluding on-road costs).

Although the new range’s asking prices are almost $8000 higher of than those of the MY20 hatch and sedan, Audi says the new RS3 offers almost $10,000 worth of additional standard equipment compared with its predecessor (see below).

Compared with the outgoing range, the new RS3 derivatives produce 20Nm more torque for a total of 500Nm (available between 2250 and 5600rpm) and, with 294 kW available from 5600 to 7000rpm, the newcomers are said to accelerate from zero to 100km/h in 3.8 seconds, which is three tenths of a second faster than their predecessors.

And while the new model is faster than before, Audi has ensured that the new RS3’s is reasonably fuel efficient; Audi claims the Sedan and Sportback twins sip 8.2- and 8.3 litres per 100km respectively while emitting 188 and 190 grams of CO2 per kilometre.

A fully variable flap control system in the exhaust system ensures that the RS3 emits a sonorous – but not overly boisterous – soundtrack, while the adoption of an electronically controlled RS torque splitter provides “greater stability and agility during dynamic driving”. The unit reportedly reduces understeer while improving turn-in and steering response.

What’s more, the inclusion of a new RS Torque Rear mode means that the RS3 can be made to perform drifts (on a closed road). The function sees 100 per cent of the drive transmitted to just one of the rear wheels; Audi claims a maximum single-wheel torque value of 1750Nm.

Adaptive damper control supersedes the magnetic ride control of the RS3’s predecessor and, as before, the driver can fine-tune the shock absorbers’ damping characteristics. The settings of the engine, transmission, torque splitter, steering and exhaust can also be adjusted.

“The unique combination of looks, driving performance and of course, that iconic Audi five-cylinder engine, proved to hit a real sweet-spot with Australian performance car buyers. Incredibly, for many months throughout its lifetime, more than every fourth A3 vehicle we delivered was an RS3 Sedan or Sportback,” Mr Sansom added.

Both RS3 variants ride on 19-inch five-spoke Y-style cast-alloy wheels and are adorned with an RS-specific rear bumper with built-in diffuser and twin exhaust outlets.

Peripheral items, including the wing-mirror caps, rocker inserts, tailgate and roof lip spoiler, are available with a carbon-fibre reinforced plastic (CFRP) finish to provide what Audi says is “an even sportier look”. The RS3 range is available in a total of eight exterior colours.

Inside, the RS3’s fascia incorporates a 12.3-inch Audi virtual cockpit instrument screen with RS-specific displays and shift light (for use in manual mode). A 10.1-inch display shows the RS3’s vital stats, including engine coolant, transmission and oil temperature readouts, as well as g-force data and tyre pressures. A head-up display is also standard fit.

From launch, the RS3 is available with four optional appearance packages that include a carbon package, matte aluminium styling package, RS design package, as well as an RS dynamic package plus. A comprehensive five-year service package is available for $3850.

“Obviously we’re delighted to bring the all-new RS3 to Australia in anticipation of meeting increased customer demand. With all of its advancements – particularly in terms of driving dynamics – the all-new RS 3 is sure to go down in history as the ultimate performance car in its segment,” Mr Sansom concluded.