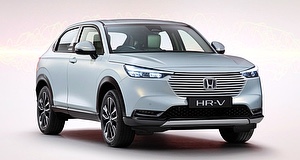 HONDA will offer its new HR-V, which is scheduled to be introduced in Australia next year, with the choice of petrol and petrol-electric drivelines, a government website has revealed.

Certification documents accessed via the Australian government’s infrastructure portal show that approval has been granted for the next iteration of the Japanese brand’s small SUV to be offered with either a 1.5-litre four-cylinder i-VTEC petrol engine paired with a continuously variable transmission (CVT), or a 1.5-litre four-cylinder petrol engine paired with dual electric motors.

Output figures for the former show the base HR-V – also known as the Vezel in some markets – will now produce 87kW/142Nm – or 18kW/30Nm less than the outgoing 1.8-litre petrol model – while the e:HEV hybrid version, which will have 2 drive modes, will develop 96kW/253Nm.

The hybridised HR-V combines a 78kW/127Nm version of the normally aspirated 1.5-litre engine with dual electric motors, which are powered by a lithium-ion battery pack. The petrol-electric variant is claimed to return a combined-cycle fuel economy figure of 5.4L/100km (WLTP).

That number places the hybrid model at a considerable advantage over the existing 1.8-litre petrol variant, whose claimed combined cycle fuel economy figure begins at 6.6L/100km.

As previously reported by GoAuto, the new HR-V is the latest model to join Honda’s expanding line-up of electrified vehicles, all of which are fitted with versions of the brand’s e:HEV system.

The system is based around the electric motors rather than an internal combustion engine – the fuel-burning powerplant is there purely to help generate electricity for the battery and motors.

Curiously, the government website also states that the “vehicle length with optional parts is 4346mm” suggesting the hybridised variant may feature reprofiled bumpers. The hybrid HR-V is also 20mm shorter than the outgoing HR-V and offers an additional 100mm of ground clearance.

The driving position is also 10mm higher than that of the current model. For reference, the current (Thai-built) HR-V measures 4348mm in length, 1772mm in width and 1605mm in height.

The new HR-V’s interior is designed to provide optimal outward visibility for all occupants. The wider windscreen, lower dashboard and door-mounted wing mirrors offer a better look at the road ahead, while the level shoulder line is said to improve rear passengers’ view out of the cabin.

The HR-V’s cabin will feature an updated infotainment system and digitised instrument cluster familiar to the newly launched Civic. The SUV features a 9.0-inch touchscreen infotainment array with “a simplified and fully customisable menu layer”, which aims to minimise driver distraction.

The interface, which is navigated using familiar smartphone-style controls, also supports smartphone mirroring via the Apple CarPlay and Android Auto apps. Over-the-air software upgrades are available through any Wi-Fi connection.

Honda Australia is yet to confirm pricing or specifications of the new HR-V. The small SUV is currently available in four trim grades and is priced from $26,900 to $41,000, plus on-road costs.

VFACTS sales data shows the HR-V is one of Honda Australia’s best-selling models. Year-to-date statistics place the HR-V tenth in the SUV Small (under $40k) segment with unit sales of 5298 to the end of November.