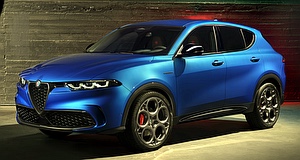 ALFA ROMEO has unveiled its first all-new model since 2016 in the shape of the Tonale premium small SUV, which will compete with models such as the Audi Q3, BMW X1, Mercedes-Benz GLA and Volvo XC40 when it goes on sale in Australia early next year.

Although it’s officially the first new Alfa Romeo model to be introduced since the formation of the Stellantis Group early in 2021, it’s not built on shared (PSA-sourced) underpinnings. Instead, it is based on a modified version of the Fiat 500X/500L, Jeep Compass and Renegade platform.

Fans of the Alfa Romeo brand will be relieved to see that the production version of the long-awaited Tonale (Toe-nah-ley) is not dramatically watered down, stylistically speaking, from the concept version that debuted at the Geneva Show in 2019. Some would even go so far as to say the newcomer is the most distinctive/least derivative design in the premium small SUV segment.

At 4530mm in length, 1840mm in width and 1600mm tall, the Tonale has a low-slung silhouette, with a distinct “GT Line” that runs along the waistrail from the rear to the headlights, short overhangs, sport bumpers and “teledial” wheels available in 17- to 20-inch in size.

The newcomer is instantly recognisable by its “3+3” Full-LED Adaptive Matrix headlights, which incorporate DRLs, dynamic turn signals and a “Welcome and Goodbye” functions and work in conjunction with Adaptive Driving Beam and Glare-Free High Beam Segmented Technology.

At the rear, the combined tail-lamp and light bar LED module echoes the design cues of the headlights and forms a sine curve that fully wraps around the Italian newcomer’s tailgate.

The sporty theme continues inside where the “telescopic” instrument panel behind the 3-spoke sports steering wheel (fitted with aluminium shift paddles) houses a 12.3-inch TFT screen, which is complemented by an Android-powered 10.25-inch touchscreen infotainment array, which includes, inter alia, navigation, the Alexa voice assistant and a 360-degree camera view (with dynamic grid).

Other conveniences offered include the new DNA drive-mode selector, which juts out from one of the uprights above the centre console, dual-zone climate control, ventilated and heated front sports seats, LED ambient light, 14-speaker audio system by Harman Kardon, wireless charging pad, a “Semi-Automatic Parking” system, reverse camera and an electronically operated tailgate.

The new model also marks a significant departure for Alfa Romeo… Although the Tonale will be available with 2.0-litre turbo-petrol and 1.3-litre turbo-diesel engines, such derivatives will only be offered in selected markets. Instead, petrol-electric powertrains dominate the line-up.

From launch, the Tonale will be offered in hybrid and plug-in hybrid guise with a 1.3-litre turbo-petrol engine combined with a 48-volt 15kW and 55Nm “P2” electric motor.

The entry-grade petrol-electric mild-hybrid produces 97kW/240Nm and drives the Tonale’s front wheels via a seven-speed dual-clutch transmission. Mid-tier variants feature a variable-geometry turbocharger to produce peak power of 119kW, while the range-topping plug-in hybrid Q4 uses a six-speed torque converter transmission and has a combined power output of 205kW.

In addition to featuring all-wheel drive, the Plug-in Hybrid Q4 is equipped with a 15.5kWh battery. Alfa Romeo claims the top-of-the-range Tonale has an electric-only range of up to 80km in the city cycle (60km on the combined cycle), a 0-100km/h acceleration time of 6.2 seconds and that a full battery charge will take 2.5 hours when using a 7.4kW fast charger.

The newcomer is also said to have 50:50 weight distribution and “the most direct steering ratio in the segment” (13.6:1). It rides on independent MacPherson suspension with Frequency Selective Damping (FSD) technology, with electronic adaptive suspension as an option.

An electronic limited-slip differential is standard, while stopping power comes courtesy of a brake-by-wire setup (Integrated Brake System), with ventilated discs and Brembo four-piston calipers at the front.

The Alfa Romeo Tonale will be manufactured at Stellantis’ Pomigliano d’Arco facility in Italy.