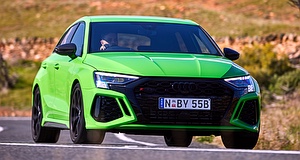 IT WOULD be easy to dismiss the new RS3 as being a re-shell of the old one. After all, the form factor is familiar – take your pick of a five door ‘Sportback’ hatch or a trad four-door sedan – the engine remains the brand’s familiar 2.5-litre turbo inline five, a seven-speed dual-clutch auto is still the only transmission option, and the critical metric of peak power has stayed static at 294kW.

But greater changes lie under the skin, ones that not only make the 2023 Audi RS3 a faster car than its predecessor, but changes that fundamentally alter the character and capability of Audi’s giant-slaying hyper hatch.

Let’s start with the engine. Yes, it’s largely the same alloy-blocked 2.5-litre inline five as before, but while peak power remains at 294kW, that figure is now arrived at 1400rpm lower in the rev range at 5600rpm. Torque is also up by 20Nm, with the maximum 500Nm of twist on tap at just 2250rpm, and lasting right up until 5600rpm.

Another key change is the adoption of a new exhaust system that places a fully-variable diverter valve in the pipes, allowing the exhaust note of that iconic five-cylinder to be modulated with more precision and resulting in better sonics as a result. Critics of the last-gen RS3’s exhaust note, which was strangled when the model adopted a petrol particulate filter in a 2020 update, will be pleased to note that the new RS3 doesn’t suffer the same issue – that Angry Audi soundtrack is well and truly back.

Extroverts will also appreciate the RS3’s pumped-up bodywork, with dramatically widened front guards mirroring the wide-hipped rear arches, and functional ducts in the front bumper directing air toward the mammoth 375mm brake rotors and a vertical air extraction vent between the front doors and the quarter panel.

The RS3’s form clearly follows its function, but Audi’s designers have succeeded in making it look mean and purposeful while simultaneously keeping the engineers and aerodynamicists happy. It looks particularly tasty in Python Yellow, Turbo Blue or Kyalami Green, and there’s plenty to visually differentiate the RS3 from its S3 brother – after all, given the $20K difference in price between them you wouldn’t want bystanders to confuse your RS3 for a mere S3. The headlamp DRLs that spell out “R-S-3” upon start-up are a neat touch too.

There’s plenty of performance bite to match the visual bark, however. A boxer’s fancy footwork might look impressive, but it means nothing until they start landing punches – and the RS3 punches hard.

The engine is largely a known quantity, but the additional torque and shift in power delivery grants the RS3 considerable low-down urge. Once you get past some minor turbo lag it pulls relentlessly right up until its 7000rpm redline, all the while emitting that beautiful five-cylinder thrum from its tailpipe – punctuated with a muffled sneeze from the turbo recirc valve on throttle lifts. The seven-speed S-tronic dual-clutch auto pairs well with the powerplant, delivering ultra-quick shifts via the paddles, and intelligent shift mapping when left in normal or sport auto modes. With launch control, the combo is good enough for a 3.8-second 0-100km/h sprint.

But there are two crucial mechanical upgrades that are standard-issue on the RS3 that do the most to inject a more raucous personality and greater performance.

The first is its RS Torque Splitter and its attendant RS Torque Rear drive mode: a proper mechanical torque-vectoring system integrated within the rear differential that can divvy up the left/right torque split by up to a full 100 percent. Beyond just being a traction aid, it also helps the car pivot into a corner better by directing more torque to an outboard rear wheel, or, depending on what the driver’s inputs are, it can shuffle torque left and right as required to help keep the car pointed where the driver wants it to point.

Which is where the RS Torque Rear mode comes in. Essentially ‘drift mode’ by another name, RS Torque Rear preferences the rear axle when figuring out what torque split to employ, and if the driver pulls back the stability control an appropriate amount, it results in lurid skids that can be easily controlled via the accelerator pedal, rather than the steering.

At the RS3’s launch, a practical demonstration on a skidpan had us drifting with considerable ease within minutes, enjoying the almost laughably easy accessibility of the RS3’s tail-out capabilities. No joke, this is about as easy to drift as a Toyota 86, and the drivetrain trickery that’s deployed to make it so is absolutely imperceptible.

The second ace up the RS3’s sleeve is something a little more basic: its wheel and tyre package. The new RS3 utilises an unorthodox reverse-staggered tyre setup, that puts a wider tyre on the front axle and a narrower one on the rear. Such a setup was also available in the last generation, albeit as a cost option, but this time around the rubber is even fatter – 265-section Bridgestone Potenza Sports now live up front rather than the 255s of the previous RS3’s optional wide wheel package, while 245/35R19s are fitted at the back.

With more weight in the nose of the car, putting the wider rubber up front means there’s more grip to help manage that mass, which then results in a chassis balance that’s much closer to ‘neutral’ than RS3s of yore.

We only had a small handful of laps at South Australia’s The Bend circuit to get acquainted to the RS3’s on-track behaviour, but the initial impression is a good one. There’s loads of front-end grip to exploit (along with accurate and meaty-feeling steering), and while tipping into a corner with too much speed will see the nose wash predictably wide (as it would in pretty much any car), the threshold of understeer is incredibly high for a nose-heavy AWD car. And this is on the standard Bridgestone rubber, mind you, not the Pirelli Trofeo R track-day tyres that are available as a dealer-fit option. The performance headroom seems enormous.

What’s more, you can actually use power to alleviate some of that front-end push. Mild understeer can be countered by feeding on power, which then brings that torque-vectoring rear differential into play by putting more drive on the outboard rear wheel to help get the car turning again. Feed on the power earlier than you normally would, and the result is a high-G slingshot around all but the tightest corners.