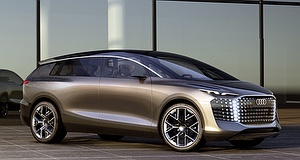 AUDI has revealed its Urbansphere concept this week, a model it says focuses on a future where autonomous driving in traffic-dense megacities will be the norm. The Urbanshpere is focused squarely on the Chinese market and was crafted in a collaboration between Audi’s design studios in Beijing and Ingolstadt.

Interestingly, the Urbansphere was designed from the inside out, which is why the concept’s passenger space – and its city-focused pragmatism – takes precedence over the exterior design. A lounge-on-wheels approach to travel gives occupants of the Urbanspehere a relaxed and quiet space from which to enjoy their ride, with electric power ensuring there is no unpleasant mechanical noise.

“For the first time, potential customers in China could also take part in the development process, contributing their own desires and perspectives as part of a process known as ‘co-creation’.

“To make e-mobility even more attractive, we think about it holistically and with the customer’s needs in mind.”

Charging via an 800V ultra-fast DC charger can deliver up to 300km range in just 10 minutes, Audi says.

The Urbansphere is suspended by aluminium multi-link suspension with semi-active air springs front and rear and is featured with 24-inch alloy wheels in concept form.

Looking like a cross between an SUV and an MPV, the Urbansphere has minimalist exterior styling with short overhangs and an upright windscreen (to maximise interior space. The front and rear ends are adorned with LED arrays that can relay messages to other road users while functioning as traditional park-, head-, signal-, and brake-lights.

Like the previously released Grandsphere and Skysphere, the Urbanshpere concept offers Level 4 autonomous driving capability, which Audi says could become a reality by the end of the decade. As such, the Urbansphere’s steering wheel and pedals can fold away when they’re not in use.

With the largest interior volume of any Audi model, the Ingolstadt-based manufacturer claims, the Urbanshere’s cabin provides seating for four across two rows with each of the seats capable of reclining up to 60 degrees. The recliner-like chairs – which also swivel to greet occupants when the coach-style doors are opened – offer extendable leg rests, fold-down armrests and cossetting headrests, the latter replete with in-built speakers.

The infotainment system is presented on a neat, ultra-wide translucent OLED screen (with gesture control) that folds down from the ceiling. Sensor control is also incorporated into the instrument panel of the Urbansphere: it’s wood-look dashboard is able to detect where an occupant is sitting and adjust the touch controls accordingly.

The Urbansphere may also be interacted with via various voice, gesture and eye tracking sensors.

In keeping with customer demands, the Urbansphere also features several wellness features including voice and facial recognition for stressed occupants, an in-built meditation app, and even a self-illuminating hood lining that provides “glare-free lighting for the perfect selfie whenever needed”, Audi says.