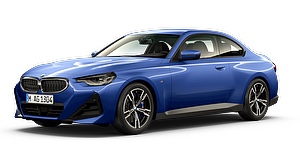 BMW Australia has added a third variant to its 2 Series Coupe range. The 230i comes to market with a 190kW/400Nm 2.0-litre four-cylinder turbopetrol engine and, apart from having a 55kW power advantage over its 220i sibling, its specification is slightly higher too.

BMW Group Australia launched the second generation 2 Series Coupe (known as the G42) on local soil late last year. Underpinned by the brand’s CLAR platform, the rear-wheel-drive compact sportscar is 105mm longer, 64mm wider and 28mm lower, as well as notably stiffer-bodied (it has 12 per cent better torsional rigidity) than its predecessor.

However, there was a chasm, performance-wise, between the 135kW/300Nm 220i and 285kW/500Nm M240i xDrive variants of the Mexican-made model, the former of which has a 2.0-litre four-cylinder turbopetrol engine and the latter a 3.0-line inline-six turbo-petrol in conjunction with all-wheel drive. All versions have an eight-speed auto ‘box.

The 230i, which will be available for customer deliveries from next month, produces 55kW and 100Nm more than the 220i and, as a result, shaves 1.7 seconds off its sibling’s stated zero-to-100km/h time (the new variant is said to complete the sprint in 5.8 seconds).

Over and above the 220i, the 230i also features M Sport brakes, Adaptive LED headlights (including high-beam assistant), comfort access (with BMW Digital Key), electric front-seat adjustment, Active Cruise Control (with Stop&Go) and a Hi-Fi Loudspeaker system.

The new variant is also available with four option packages.

The 230i variant retails for $70,900 (before options and on-the-road costs) and comes standard with a three-year/unlimited kilometre warranty.