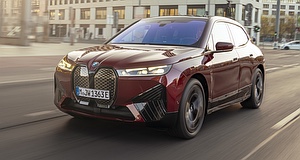 BMW Group Australia will introduce its second all-electric model to be fettled by the marque’s M Division when the 455kW/1100Nm iX M60 arrives Down Under mid-year priced from $222,000 before on-road costs and options.

The headlining iX M60, costing $52,100 more than the next most-expensive iX, is the third variant in the battery-electric large SUV line-up and follows the arrival of the i4 M50 fastback sedan, which was launched to the local market recently.

As with the two other iX variants, the iX M60 “features the most extensive range of standard equipment ever offered by BMW in the field of driving technology systems,” according to BMW.

The variant can be charged with alternating current at up to 11kW, but when its 200kW DC fast-charging capabilities are utilised, 150km of range can be added in 10 minutes (starting with a battery charge level of 10 per cent), with the ability to reach 80 per cent capacity in 35 minutes.

A rigid structure and drag coefficient of 0.26Cd for the iX M60 comes from sharing the same aluminium-rich space frame design and carbon cage found in regular BMW iX SUV variants plus carbon-fibre reinforced plastic (CFRP) used in sections of the roof, side, and rear sections.

For Australia, BMW will offer iX M60 buyers a no-cost choice of three interior design suites – Stone Grey, Amido and Castanea, the first of which incorporates a combination of cloth/microfibre trim and the rest olive leaf-tanned natural leather surfaces, in conjunction with Clear&Bold interior applications, as well as Gold Bronze component and control highlights (including on the head restraints).

Finally, BMW Australia offers the Comfort Package as a $3500 option. It includes Active Seat Ventilation for the front seats, as well as heating for the steering wheel, centre console, armrests, the lower section of the instrument panel, as well as the upper trim sections of the door panels.

BMW says it has used responsibly-sourced materials in construction of its i-model range, including throughout the supply chain and manufacture of the vehicle’s lithium-ion battery packs.

“The supply of cobalt and lithium required for the high-voltage batteries is procured by the BMW Group from controlled sources in Australia and Morocco and delivered to the battery cell manufacturers,” BMW said in a statement.

“The design principle of the electric motors makes it possible to dispense with the use of rare earth metals in the rotors of the drives. In addition, the company acquires aluminium produced using electricity from solar energy plants.

“One hundred per cent green electricity is used for manufacturing the vehicles as well as for manufacturing battery cells. A high proportion of secondary aluminium and recycled plastic also contributes to the resource-efficient production of the BMW iX M60.

“Interior aspects include FSC-certified wood and other natural materials, while recycled fishing nets serve as raw material for the floor coverings and floor mats,” the statement concluded.

The iX M60 comes with a complimentary five-year use of the Chargefox network (including Ultra Rapid chargers).