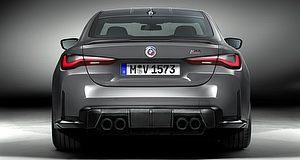 BMW’s M Division has confirmed that a limited-edition M4 Edition 50 Jahre model will arrive in the Australian market in Q4 this year.

The news comes just days after BMW announced the imminent arrival of its 405kW M4 CSL, which is also slated for Australian delivery later this year. The M4 CSL, which is priced from $303,900 (plus on-road costs), will join the M4 Edition 50 Jahre in celebration of BMW M’s golden anniversary and, suffice to say, will be the fastest road-legal M3/M4 ever.

The model is further distinguished by 50 years of M emblems on the bonnet, bootlid and wheel centres, while ‘Edition 50 Jahre BMW M’ lettering decorates interior touchpoints, such as the door-sill covers, head restraints and centre console-mounted plaque.

The M4 Edition 50 Jahre will retail from $201,900 (plus on-road costs) – $30,400 more than the derivative on which it is based. BMW will also include its M Driving Experience Advance 2 course as part of the purchase price.

The limited-edition M4 Edition 50 Jahre features no further mechanical changes over the standard M4. It is powered by BMW M’s 375kW and 650Nm twin-turbocharged 3.0-litre I6. BMW M says the model can accelerate from standstill to 100km/h in just 3.5 seconds.

BMW M (formerly BMW Motorsport) was established in 1972 to facilitate BMW’s racing program, but evolved to create showroom models, such as later examples of the 3.0 CSL. The first official M model was the M1 in 1978, followed a year later by the M535i.