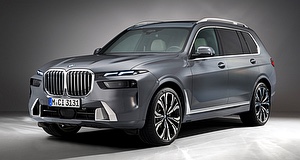 LUXURY road travel may have once been the domain of limousines but now that mantle goes to large SUVs like BMW’s updated X7, which is now confirmed to cost from $166,900 before on-road charges when it arrives in Australian showrooms during the fourth quarter.

Munich’s luxury car-maker has announced full specification and prices for the three-variant line-up of its sumptuous flagship that will be offered with two upgraded engines as well as varying trim and styling levels.

The X7 xDrive40d, which replaces the xDrive30d and brings with it power and torque increases as well as a significantly expanded specification offering, will be available in M Sport and Design Pure Excellence levels.

The vehicle features a raft of styling, technology and powertrain developments including an “impactful” front end, a new M Sport version, the first time factory-fit alloy wheels of up to 23 inches in diameter have been offered on a BMW and the latest-generation iDrive control and operation system including BMW’s Curved Display and Operating System 8.

For the driver there is a newly designed instrument panel and dash with slim air vents and an ambient light bar included as standard in its lower section combined with the curved digital display.

Optional second-row captain’s chairs are fitted with independent armrests that can be extended or folded down.

The new-look front end picks up on design cues from the 7 Series limousine, such as the twin headlights and large BMW kidney grille. BMW says this new interpretation of its styling language emphasises the X7’s upright stance and reinforces its road presence.

M Sport variants have identifying design features for the exterior and interior starting with the duco, particularly the new addition of Sparkling Copper Grey metallic.

The engine range is headed by a new 4.4-litre petrol V8 for the range-topping BMW X7 M60i xDrive, a unit derived from the engines powering high-performance machinery from the BMW M division to develop a meaty 390kW and 750Nm.

Detailed upgrades to the six-cylinder in-line diesel engine in the X7 xDrive40d have also yielded improvements to its fuel economy and emissions.

The maximum output of its overall drive system is 259kW, while nominal torque of the diesel engine is 700Nm, increased to as much as 720Nm with input of the mild hybrid system.

BMW’s new-generation 48-volt mild hybrid system comprises a crankshaft-mounted starter generator integrated into the transmission and contributes an additional 9kW of output and an extra 200Nm of torque.

In addition, the generator is used as a starter motor to fire the combustion engine and recuperates kinetic energy during coasting and braking.

All engines partner with an eight-speed Steptronic Sport transmission including shift paddles on the steering wheel. Engine power is channelled to the via the “intelligent” xDrive all-wheel-drive system.

Among an expanded selection of driver assistance systems is a new Trailer Assistant feature.

Naturally for a high-end product, BMW will also offer a comprehensive range of options for the new X7 and a high level of personalisation.