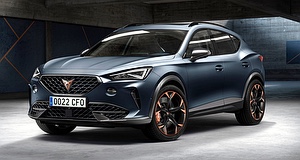 SPANISH performance brand Cupra has officially entered the Australian market with a selection of sporty models priced from $43,990 through to $61,990 plus on-road costs.

Volkswagen subsidiary Seat created the  Cupra  brand in 2018 as its independent high-performance branch, the products of which will now be sold through a network of nine dealerships called Cupra Garages in most Australian capital cities, as well as the Gold Coast and the ACT.

Most Cupra Garages open August 1, with some operating from interim premises.

According to Cupra, “Garage locations include high-traffic central business district (CBD) and key urban addresses, as well as awareness-driving shopping centre destinations that will proactively welcome Australians to the brand.”

The company is using an online order model as one of its main sales channels.

“We have ensured that online ordering is complemented by Cupra City Garage and agent locations that deliver high-quality interactions and a seamless purchasing process – including transparent driveaway pricing and three-year scheduled servicing included,” the company states.

By early next year, a total of nine Cupra variants will be available with four trim and driveline combinations each of Leon small five door hatch and Formentor coupe-SUV, plus one version of the Ateca medium SUV.

Cupra is using four specification levels: V, VZ, VZX and VZe for Leon and Formentor and only top-spec VZX for Ateca.

All except the “e” hybrid models have 2.0-litre turbo-petrol four-cylinder engines in varying states of tune.

The hybrid cars utilise a 1.4-litre turbo-petrol four generating 110kW/250Nm coupled to an 85kW electric traction motor for a combined output of 180kW/400Nm.

All variants except the six-speed “e” cars feature a seven-speed dual-clutch transmission, while all-wheel drive is fitted to base model Formentor V and VZX Formentor and Ateca. The others are front-wheel drive.

First shipments of the Cupra range are now arriving in Australia, with first deliveries commencing in August. Test drives of VZe hybrid models will be available from August.

All variants are well-specified and are delivered with towing pre-wiring at no extra cost across the MY23 Ateca and Formentor range.

All models are covered by a five-year, unlimited-kilometre warranty and three-year scheduled servicing.

The dealership locations at launch are: