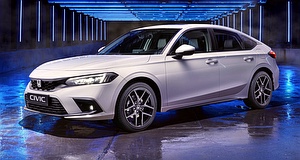 HONDA has taken the wraps off its all-new Civic Hybrid hatch in Europe. The Japanese marque’s five-door is expected to reach local showrooms before the end of the year.

The Civic Hybrid is the first electrified variant to grace Honda’s small-car range since 2015 and, like the recently revealed HR-V Hybrid, features the brand’s e:HEV petrol-electric hybrid setup, which combines a normally aspirated petrol engine with dual electric motors.

Unlike the HR-V, which employs a 1.5-litre four-cylinder petrol engine, the five-door Civic is powered by a larger (2.0-litre) motor sourced from the Honda Accord and the Atkinson-cycle mill claimed to be one of the most thermally efficient engines on the market.

The Civic Hybrid will offer combined outputs of 135kW and 315Nm, with Honda promising a targeted fuel economy figure of less than 5.0 litres per 100km. Honda has not provided an all-electric driving range for its newest hybrid model, nor has it listed a 0-100km/h acceleration time.

Apart from the 2.0-litre motor, the front-wheel-drive Civic Hybrid is equipped with a 72-cell lithium-ion battery pack and the power unit is paired to a continuously variable transmission (CVT). The driveline can switch between EV, Hybrid and Engine drive modes automatically, or through four drive models – Eco, Normal, Sport and Individual – as selected by the driver.

The model is identified by e:HEV badging on the tailgate, blue trim garnishes, a reprofiled rear bumper, and concealed exhaust outlets. It also receives push-button transmission controls and hybrid-specific menus and displays on the central array and instrument panel.

In other markets, the Civic Hybrid e:HEV will be offered in three trim grades: Elegance, Sport and Advance; although it is expected that, like the petrol-powered variant, Honda Australia will offer just one highly-specified hybrid variant when the model touches down locally.

Honda says the Civic e:HEV will go on sale in Europe in the third quarter of this year with Australian sales to commence in later half of 2022. Pricing and specification will be announced closer to the model’s local launch; however, it is expected the petrol-electric variant will be priced above the existing Civic VTi-LX, which sells for $47,290 drive-away.

Year-to-date sales of the eleventh-generation Civic trail those of most of its small car rivals. At the time of writing, Honda Australia had sold just 144 examples of the Civic nationally in 2022, a mere fraction of the sales recorded by contemporaries including the Hyundai i30 (3398), Toyota Corolla (3113), Kia Cerato (2396), and Mazda 3 (2376).