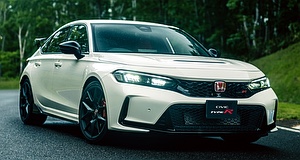 HONDA has unwrapped its FL5-series Civic Type R online today (June 21), ahead of an Australian launch in early 2023.

Powered by a revised version of the 2.0-litre iVTEC TURBO engine offered in the previous generation Civic Type R, Honda says the new model will offer more power and responsiveness than before but has yet to confirm power and torque figures. As a reference, the outgoing model produced 228kW/400Nm.

The front-wheel drive model will again arrive as standard with a six-speed manual transmission with a rev-matching function. The Civic Type R is said to ride on the same stiffer body that features under regular Civic variants, albeit with model-specific suspension, adaptive damping, a limited slip differential and Brembo high-performance brakes.

“By further advancing the concept of the predecessor model, Ultimate Sport, the all-new Civic Type R was developed with the goal to achieve pure sports performance that attains the ultimate in speed and the joy of driving,” Honda said in a statement.

“The value proposition of the Type R is to realise both speed, which is the essential value of a sports model, and driving pleasure, which appeals to the emotion of the driver.”

“Based on the Civic hatchback, which has been well received in the market, low and wide packaging was further pursued to elevate driving performance for the Type R version,” Honda added.

“A forward field of vision with a wide view of the road is featured with the aim of providing information directly to the driver while driving at a high range of speed.”

“The exterior design team targeted styling for both overwhelming speed and beauty. The wide guards, which are integrated with the body, are shaped to flow beautifully from the side panels and enhance aerodynamic performance by controlling air flow that continues uninterrupted from front to rear.”

Technology items include a 9.0-inch infotainment array and 10.2-inch digital instrument cluster, as well as a drive mode selector with quick-access +R button.

“The front seats are designed with a three-dimensional polyhedral form to firmly support the body so that driver and front passenger feel complete confidence, even while driving on a racing circuit at the vehicle’s full potential,” the Honda statement continues.

“The adoption of a suede-like seat surface material with a high friction coefficient reduces body slippage in high-G situations such as cornering and sudden acceleration or deceleration.

“As for the meter design, in addition to the standard display, +R mode-exclusive designs were adopted.”

“Placing the primary focus on enabling the driver to instantly recognise necessary information during sporty driving, including on a racing circuit, the upper part of the meter displays key information such as engine rpm, rev indicator and gear position indicator, while the lower part functions as a multi-information display that can show vehicle information selected by the driver.”

“By adopting an illuminated rev indicator, the driver can obtain information intuitively without keeping close watch on the indicator, along with instantaneous visual recognition of the information and a stimulating meter design.”

The Type R nameplate has been around since 1992 when it debuted on the NSX supercar, however it wasn’t applied to the Civic until 1997 with the release of the EK9 generation.

Since then, it has spanned five generations of Civic to date with the FL5 series set to be sixth iteration of what has become one of the most famous hot hatch lineages.

The Honda Civic Type R will arrive in local showrooms in early 2023. Pricing and specifications will be confirmed closer to the model’s Australian launch.