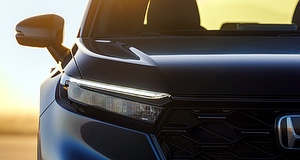 HONDA has teased images of its “more rugged and sophisticated” CR-V. The sixth-generation model is expected to be unveiled in the latter stages of this year.

The Japanese manufacturer says the next iteration of the medium SUV will offer more  versatility, as well as “a more advanced hybrid system for a sportier driving experience and greater capability” but has yet to officially confirm powertrains or specifications.

Based on the Honda Architecture (HA) modular platform that underpins the third-generation HR-V, upcoming ZR-V and 11th-generation Civic, the new CR-V is likely to  feature the same 2.0-litre Atkinson cycle petrol and dual-motor electric hybrid driveline as its small-car sibling, but with the outputs of the latest Accord e:HEV (158kW/315Nm).

It is also anticipated that the sixth-generation CR-V will offer petrol power in the form of a 1.5-litre turbocharged four-cylinder with 140kW and 240Nm (as the recently introduced Civic hatchback does). Front- and all-wheel drive configurations are expected.

Speaking to GoAuto this week, a Honda Australia spokesperson said simply, “we will have a new-generation vehicle joining the Honda line-up in Australia in the next 12-18 months and will be able to confirm further details on the new model – including its name – in due course”.

With more purposeful styling than before, improved fuel efficiency and a roomier, more tech-laden interior, the upcoming model is expected to maintain, or even improve upon, its already strong presence within the Medium SUV (under $60k) segment.

The current 2022 Honda CR-V range is priced below.

Honda is also set to release a sub-CR-V crossover later this year in the form of the recently announced ZR-V. Slotting between the HR-V and CR-V, the ZR-V will likely feature powertrains familiar to the recently launched third-generation HR-V small SUV.

The ZR-V will rival models such as the Nissan Qashqai, Mazda CX-3 and Skoda Karoq. What’s more, Honda says its new “niche model” was designed to meet “the mobility needs of Generation-Z buyers”, hence the letter “Z” in the model’s nameplate.

GoAuto understands the five-seat SUV will follow the Civic and HR-V in offering drive-away pricing and relatively high trim grades, although how the ZR-V will be positioned against segment stalwarts remains to be seen.