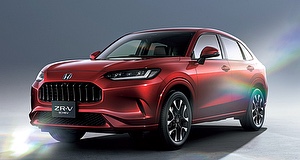 HONDA Motor Company has launched a teaser page on its company website to share what it says is initial information related to its all-new ZR-V SUV.

Scheduled to go on sale in Japan from September, the five-seat model will slot between the HR-V and CR-V in Honda’s SUV portfolio and is being released under the “unleash your potential” concept with Honda saying the model was developed to “uplift the spirit of its customers”.

Based on the same underpinnings as the eleventh-generation Civic, the ZR-V will rival models such as the Nissan Qashqai, Mazda CX-3 and Skoda Karoq.

Key features for the model are expected to emulate those offered in the newly launched Civic and HR-V, as well as the recently announced CR-V, Honda insisting the model will enable the driver to enjoy the vehicle with more confidence and in a relaxing manner when compared to other new SUV models.

Further, the Japanese brand says the ZR-V adopts a smart and elegant design which it hopes will see it “fit in well in urban environments.” The exterior design features flowing proportions like those of the HR-V, but with more individualised elements across the front fascia.

The ZR-V features a vertical grille which blends seamlessly with the bumper surround and is flanked by narrow, wide-set headlights like those found on the latest Civic and HR-V. Honda says the front of its latest SUV is meant to convey “highly sophisticated expression, yet with stature and a strong presence”.

With a widened stance, the rear of the body aims to add volume to the ZR-V’s proportions, the rear haunches and tailgate culminating in a smooth, upswept look that is neither as edgy as the HR-V, yet as stylised as many competitors’ coupe-SUV offerings.

Inside, the link between other new-generation Honda models is evident. The cabin of the ZR-V is spacious and open with an instrument panel that stretches out horizontally across the dashboard, and a well-presented array of functional elements finished with their own high-quality design.

Like the CR-V, the ZR-V features a high-deck centre control to separate the front seats and create individual zones for the driver and front-seat passenger. The model also promises an elevated view of the road and a wide, horizontal field of vision thanks to drawn back A pillars and door-mounted wing mirrors, again like those of the Civic, HR-V and forthcoming CR-V.

Further to this, Honda says it has paid particular attention to the positioning of the rear window glass to “make it easier for the driver to recognise objects behind the vehicle, including vehicles and pedestrians.”

Carrying over one of the most valued attributes of Honda SUV models, the ZR-V again promises to offer a low seat hip point for easier entry and egress, the rear seat line slightly lowered to allow designers the chance to reduce the roofline and improve aerodynamic performance.

Despite this, Honda says the ZR-V will offer user-friendly storage spaces and “excellent utility” to meet various customer needs.

Honda will offer the ZR-V with both petrol and petrol-electric hybrid power, the latter arriving courtesy of the Sports e:HEV unit from the Civic.

That unit combines a 2.0-litre direct injected petrol engine with an advanced dual-motor electric hybrid system and continuously variable transmission to provide what Honda says is a “high quality and exhilarating” driving experience on “city and suburban roads, highways and winding roads.”

GoAuto understands the ZR-V will also be offered with a turbocharged 1.5-litre petrol unit paired to a continuously variable transmission and driving the front wheels as standard. It is also understood that both variants will be available with all-wheel drive.

Honda will officially unveil its ZR-V to the Japanese public on 13 August with the order books to be opened from 1 September. The ZR-V is expected to arrive in Australian showrooms within the next 12 to 18 months.

Speaking to GoAuto News at the launch of the HR-V recently, Honda Australia managing director Stephen Collins said of the ZR-V, “This new SUV will sit between the HR-V and the CR-V, and it will give us a stable of really competitive SUVs that will form a big part of our strategy going forward.”

“We are confident that we will have three SUVs that will suit different customer needs. The HR-V is more suited to younger and female buyers, and we think the new model (ZR-V) will be more of a family type SUV. The CR-V will continue to attract those family buyers who are looking for something a bit larger.”

“So, we’re really confident that each of the SUVs will be positioned very nicely in terms of size and specification,” concluded Mr Collins.