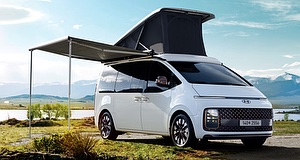 HYUNDAI has introduced a rival to the Mercedes-Benz V-Class Marco Polo and Volkswagen Transporter California in its Staria Lounge Camper unveiled last week.

The Staria-based model, which is made specifically for the South Korean market, is based on the flagship Lounge variant and available in four- and 11-seat configurations – with black or brown upholstery.

The pop-up roof camper features an inflatable double bed with mosquito net, curtains and living area equipped with a folding table and a small galley-style kitchenette with built-in pantry.

The Staria Lounge Camper’s pop-up roof is electronically actuated and illuminated by more LEDs. All the model’s features are controlled via a 12.1-inch folding entertainment and control screen (dubbed Smart Control System) located over the kitchen bench.

At the rear of the van is the option for a shower head and additional power outlets that fit neatly into a panel located by the driver’s side tail-light.

Front-drive and H-Trac all-wheel drive configurations are available, with both paired to an eight-speed automatic transmission.

Hyundai Motor Company Australia (HMCA) currently has no plans to introduce the model locally but will continue to monitor the model’s availability – and the increasing popularity of factory-converted campervans – as the market expands.

Meanwhile, the passenger-focused Staria ranks second in the People Movers under $60K segment with 515 unit sales, behind the strong-selling Kia Carnival with 1479 year-to-date sales.

Were it to be sold locally, the Hyundai Staria Lounge Camper would slot into the People Mover over $60K segment where it would vie against such rivals as the Mercedes-Benz Marco Polo, Valente and V-Class, the Toyota Granvia, and the Volkswagen California.