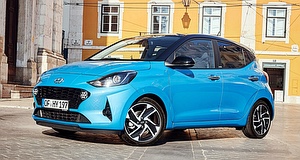 HYUNDAI has this week confirmed it will produce an “affordable EV for Europe” possibly based on the i10 light hatch.

Though no details are confirmed, a tiddler-size Hyundai EV may be based on the existing i10 to cut costs utilising components from the Ioniq electric model that is still (only just) available through dealers at $54,600 plus on-road costs.

If it was to come to Australia, indicative pricing on an i10 based EV would place it at around $30,000 making it, in today’s market, by far the cheapest EV available.

A Hyundai Australia spokesman said the importer has “no comment to make” regarding the Prague revelation.

Hyundai’s smallest offering in Australia at the moment is the i20 N hot hatch priced at $32,990 plus on-road costs; but it is a size up on the i10 (pictured) which has been available in European and Asian markets in the current generation for a couple of years.

According to ANE, the South Korean car-maker is developing an affordable, pure EV for Europe that could succeed the petrol-powered i10 but it will take some time to develop a production-ready version.

Speculation relating to what would power such a vehicle centres around Hyundai’s Ioniq Electric, which is currently being phased out, but components from which could be re-purposed in an EV minicar to keep costs down.

That would mean a 100kW/295Nm single electric traction motor driving the front wheels and sourcing power from a 38kWh lithium-ion battery that is rechargeable in as little as 54 minutes using a 100kW charger.

In the 1540kg Ioniq Electric, a claimed range of 311km is possible; though that would be greater in a smaller, lighter vehicle such as an i10 EV.

Volkswagen Group is said to be working on a family of small EVs for its VW, Skoda and Cupra brands with a target starting price of €20,000 ($A29,600).

According to ANE, Mr Hofmann said Hyundai’s small EV would have similar pricing.

“Everybody in the industry knows the target of this kind of vehicle is 20,000 euros,” he told the Automotive News Europe Congress in Prague.

Mr Hofmann said city cars are tough to sell profitably because of their low pricing and due to the technical problems in electrifying small vehicles.

The brand currently sells the Ioniq 5 compact crossover joined this month, by the Ioniq 6 sedan.

“(The) Ioniq 6 will arrive in Europe before year end, but sales in most EU markets will start in early 2023,” said Mr Hofmann.

“EVs accounted for 16 per cent of total sales of the Hyundai brand in the first half (of the year).”

In his speech, Mr Hofmann spoke of the future Ioniq 7 large SUV which he confirmed for Europe but clarified the statement saying it is mainly a vehicle conceived for the US market where larger vehicles are more popular.

ANE says the success of its current electric range is helping Hyundai to increase sales and market share in Europe in the first half of 2022.

“Hyundai brand’s sales in the EU, EFTA and UK markets rose 8.2 per cent year-on-year through to June in a total market down 14 per cent. The brand’s market share increased to 4.7 per cent from 3.7 per cent, according to data from industry association ACEA,” it reported.

Notwithstanding global supply and transport problems, Hyundai aims to continue to increase its vehicle sales in Europe this year compared to last year and boost its market share.

“We are confident about the second half (of the year)” Mr Hofmann told ANE.