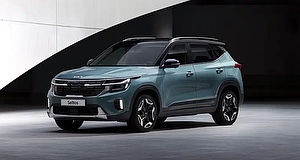 KIA has confirmed a facelifted 2023 Seltos range is set for Australia later this year, bringing design updates and a renewed interior inspired by the larger Sportage.

According to images on the car-maker’s Korean website, the small SUV scores a revised front grille, bumper, LED fog lights, LED daytime runners, as well as a heavily re-worked backside.

The rear end has been massaged significantly, with a reshaped bumper and new taillights running  down and then across the length of the tailgate to create a premium lightbar effect – similar to the Sportage.

Once in the cab, a larger curved dash houses two 10.25 screens, one for the digital instrumentation and the other for infotainment duties.

Industry talk of a hybrid Seltos has been dispelled by Kia Australia, which leaves the petrol engine options.

The Seltos is currently offered with either a 2.0-litre naturally-aspirated petrol engine producing 110kW/180Nm, or a peppier 1.6-litre turbocharged petrol engine churning out 130kW/265Nm.

The atmo 2.0-litre engine is backed by an automatic continuously variable transmission (CVT) and offered only in front-wheel-drive configuration, whereas the 1.6-litre turbocharged engine scores a seven-speed dual-clutch auto and all-wheel-drive.

It is likely the same powertrain options will be offered for the facelifted Seltos, particularly now a hybrid option has been ruled out.

As of the end of May, Kia had sold 3644 Seltos models so this year is on track to be another winner for the model, particularly with an upgrade coming.

And on price, while the updated model pricing has not yet been confirmed, while the current model starts from $27,290 before on-road costs.

More Seltos details are expected to be confirmed at the Busan motor show in Korea this month, ahead of its Q4 Australian debut.