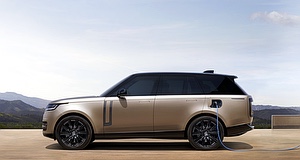 LAND ROVER Australia has confirmed pricing for the extended-range plug-in hybrid electric derivatives of the new Range Rover line-up, as well as the range-topping SV versions.

In announcing that it had opened its order books for the new-gen Upper Large SUV (Above $100k) model, the local subsidiary of the Solihull-based brand said certified data confirmed the P510e and P440e plug-in hybrid electric vehicles (PHEVs) had exceeded initial estimates to offer 113km of electric driving (according to WLTP standards) with CO2 emissions of as little as 18g/km, which translated into a (claimed) real world all-electric range of 88km.

The 13 per cent improvement means most Range Rover customers would “be able to complete 75 per cent of their journeys using pure-electric power”, Land Rover said.

A Range Rover PHEV offers 50kW DC rapid-charging capability and can be charged up to 80 per cent in under an hour, making it “one of the fastest charging plug-in hybrids”, the brand said.

The most powerful P510e combines a 38kWh lithium-ion battery, a 105kW electric motor and 3.0-litre six-cylinder engine; it is said to accelerate from zero to 100km/h in 5.6 seconds.

The new Range Rover ­– offered in SE, HSE and Autobiography trim levels, as well as an exclusive First Edition (during the first year of production) – is also available with a choice of mild-hybrid six-cylinder petrol and diesels, plus an all-new V8. Customers have a choice of four-, five- and seven-seat interiors across standard- and Long Wheelbase body designs.

The SV, meanwhile, tops the line-up, replete with exclusive materials, curated design themes and a broad scope for personalisation from the brand’s Special Vehicle Operations.

Previously offered through the outgoing range’s SVAutobiography family, the new Range Rover SV can be configured in as many as 1.6million combinations (or so it is estimated).

The SV is distinguished by a unique front bumper and five-bar grille designs, along with a laser-etched SV roundel on the side gills, a new white ceramic SV roundel on the tailgate and optional 23-inch directional three-finish wheels. Interior materials include lustrous plated metals, smooth ceramics, sustainably sourced woods and soft near-aniline leather.

“Pure luxury” SV Serenity and “stealthy” SV Intrepid design themes can be specified independently for the exterior or interior, in conjunction with the standard Range Rover SV exterior or interior’ it can also be applied as one theme to the entire vehicle. Contrasting two-tone interior schemes can further set the front and rear of the SV’s cabins apart.

Range Rover SV is available in both standard and long-wheelbase guises, including a five-seat LWB configuration for the first time.

Derivatives include the 375kW plug-in hybrid (SWB only), the D350 straight-six Ingenium diesel and refined 390kW V8 Twin Turbo. The new V8 is said to be 17 per cent more fuel efficient – and produce 50Nm more torque – than the previous 5.0-litre Supercharged V8 and propel New Range Rover SV to a 260km/h top speed.

Long wheelbase customers can also specify the four-seat SV Signature Suite – the ultimate SV interior. Its design is centred around an elegant front-to-rear console that runs the length of the cabin and accommodates an electrically powered Club Table, electrically deployable cupholders and an integrated refrigerator with SV-etched Dartington crystal glassware.

Additionally, Range Rover SV models are available with 13.1-inch Rear Seat Entertainment screens – the largest ever fitted to a Range Rover – as well as high-fidelity headphones.

New Range Rover derivatives with extended-range plug-in hybrid powertrains are available to order now from $229,200 plus on-road costs in Australia. The Range Rover SV is available in SWB from $341,300 (+ORCs), with P530 LWB derivatives retailing from $391,800 (+ORCs).

A pure-electric Range Rover – the first all-electric Land Rover – will join the line-up in 2024.