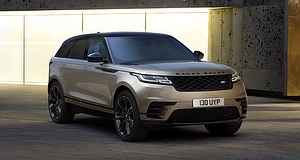 LAND ROVER has revealed the 2023 Range Rover Velar with two new additions to the range, one of which is a plug-in hybrid set to reach Australia by the end of the year.

Jaguar Land Rover says the new Velar offers “a perfect balance of sophisticated design and intelligent technology”, although it’s the addition of a hybrid option we are most excited about.

The dedicated hybrid Range Rover Velar P400e offers an all-electric range of up to 59km, while boasting fuel economy as low as 2.7 litres per 100km, courtesy of a new 2.0-litre four-cylinder engine and electronic motor combination.

A 17.1kWh lithium-ion battery provides juice for the electric motor and can be charged to 80 per cent in just 30 minutes using a DC Rapid charge point (50kW), or 1 hour 40 minutes using a standard 7kW charger.

Jaguar Land Rover’s MHEV provides a boost while accelerating and the system uses a belt integrated starter generator to harvest energy during deceleration, which is then stored in a 48-volt lithium-ion battery

This performance equates to 0-100km/h times for the six-cylinder options of 5.5 seconds for petrol and 6.5 seconds for diesel variants, making the dedicated P400e hybrid the quickest of the bunch.

All models receive all-wheel-drive and an eight-speed automatic transmission, to put power down.

The interior and onboard equipment has been overhauled for the new line-up, too, featuring Land Rover’s Pivi Pro infotainment system at its core.

Spotify is now integrated as a media source within the infotainment system, with data connection available, while up to two phones can be connected to the system at once.

The noise cancellation works like the noise-cancelling headphones we are used to wearing on planes, drowning out unwanted road noise by monitoring vibrations from the road surface and calculating the opposite phase sound wave needed.

The air purification system can be configured to refresh cabin air at set intervals, either using the Land Rover Remote App, or the infotainment system.

A five-year/unlimited-kilometre warranty will be offered, along with a five-year roadside assistance subscription.