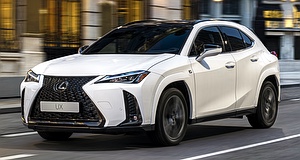 LEXUS will update the UX small SUV with several dynamic, safety and infotainment upgrades when the MY23 refresh goes on sale in Australia from the second half of this year.

The “subtle but significant” changes will feature on all petrol and petrol-electric hybrid variants and include a stiffened body structure, courtesy of an additional 20 spot-welding points, retuned dampers and a recalibrated electric power steering system.

Further, a curve speed control function that can decelerate the UX ahead of an approaching corner has been added to the adaptive cruise control system while a new camera-driven underbody transparent display function is designed to help the driver “fully recognise the vehicle’s position in relation to road surface conditions”.

All UX variants now adopt a larger 12.3-inch high-definition infotainment touchscreen (up from 10.3 inches) and Lexus Connected Services functionality – which allows owners to use their smartphone as a digital key – plus over-the-air updates, and ‘Hey Lexus’ voice recognition via a steering wheel mounted push-to-talk button.

Lexus Australia says the updated UX range is expected in local showrooms during the second half of 2022. Pricing will be announced closer to the on-sale date.