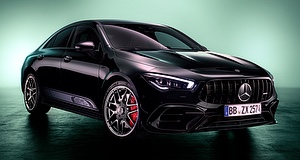 MERCEDES-AMG is extending its range of Edition 55 special models to include the A 45 S 4Matic+ and CLA 45 S 4Matic+.

Benz’s compact performance models will help the marque to celebrate its 55th anniversary and will be offered in cosmos black or digital white metallic hues with AMG decals and 19-inch AMG cross-spoke forged alloy wheels in titanium grey when sales commence later this year.

The Edition 55 duo will be further equipped with the functional AMG Aerodynamics package comprising a front apron with larger splitter and additional flics, an AMG rear wing, deflector elements at the simulated side air outlets of the rear apron, and the diffuser blade, all finished in high-gloss black.

AMG’s Night Package and Night Package II will also enhance the Edition 55 pair with the front splitter and the trim elements of the louvres in the outer air intakes, plus the inserts in the AMG side sill panels, the beltline trim strip, the window line trim strip and the exterior mirror housings are finished in high-gloss black.

In addition, the tailpipe trims are finished in black chrome, the louvres in the AMG-specific radiator grille in black chrome, and the model badges on the boot lid and wings in high-gloss black. The AMG fuel fuller cap is finished in silver chrome with A-M-G lettering.

Each example is also supplied with a customised AMG Indoor Car Cover in black with silver-coloured AMG logo.

GoAuto understands the Edition 55 duo will be unchanged mechanically from the variants on which they are based meaning both will continue to feature Benz’s M139-series 2.0-litre turbocharged four-cylinder petrol unit developing 310kW at 6750rpm and 500Nm from 5000-5250rpm. Both models run an eight-speed dual-clutch transmission and are paddle shift equipped.

Mercedes-Benz Australia says it will announce pricing of the A 45 S 4Matic+ and CLA 45 S 4Matic+ Edition 55 variants closer to the model’s arrival. As a guide, the derivative variants retail from $99,895 and $118,495 plus on-road costs respectively.