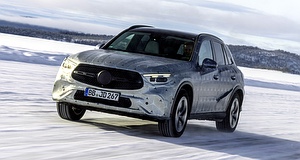 MERCEDES-BENZ is conducting winter testing of its second-generation GLC-Class medium SUV at its icy Northern Hemisphere test facility outside of Arjeplog, Sweden.

Expected to make its global debut at the end of this year (2022), the GLC rides on the same MRA2 architecture as the current C-Class and will continue to rival the Audi Q5 and BMW X3 with familiar drivetrain options, including mild-hybrid 190kW/400Nm 2.0-litre turbocharged petrol and 195kW/550Nm 2.0-litre twin-turbocharged diesel units.

All variants of the new X254-series GLC, which will also rival the Lexus NX, Genesis GV70 and Volvo XC60, are likely to be fitted with the Sindelfingen-based brand’s 4Matic all-wheel drive system as well as a nine-speed automatic transmission as standard.

The images provided by Mercedes-Benz show more clearly the shape, style and proportions of the redesigned high-riding C-Class sibling; the model looks notably larger than before with a broadened stance and pumped-up rear haunches.

While slimmer head- and tail-light clusters give the GLC a look more in keeping with the new C-Class, its interior is also expected to take cues from the W206-generation sedan. Expected adornments include an upgraded MBUX infotainment – including an 11.9-inch central infotainment cluster and 12.3-inch digital instrument panel – a new steering wheel design, and the latest “Hey, Mercedes” voice control software.

The medium SUV’s safety features will be beefed up too; features such an enhanced lane detection system, improved 360-degree camera technology, expanded traffic-sign and traffic-light recognition, an autonomous trailer reversing assistant, off-road assistants and improved adaptive cruise control will be included in the next-gen GLC-Class range.

As is the case with the current GLC, AMG variants are again expected, though this time with the hybridised four-cylinder engine options offered in the C43 and C63.

Mercedes-Benz says it has taken four years to develop the current GLC-Class. By the time the new model is green lit for production, the Three-pointed Star would have conducted more than 7 million kilometres of digital and real-world testing on the new model.

Mercedes-Benz is expected to reveal local timing, pricing and specification of its new GLC-Class closer to the model’s Australian debut. The GLC range currently starts at $78,114 (plus on road costs) for the GLC200 and tops out with the GLC63 S 4Matic+ from $185,325 (+ ORCs).