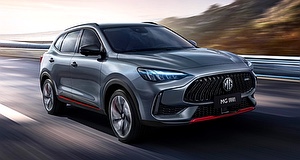 MG MOTOR says a new upper mid-grade variant of its popular HS SUV will arrive in local dealerships from the middle of this year.

The new variant, dubbed Excite, will slot beneath the current Essence (from $47,990 drive-away) variant in the MG HS Plus EV range, MG Motor public relations and communications manager, Tim Robson, telling GoAuto News that the new model will broaden the product offering of the brand’s mid-size plug-in hybrid SUV range.

“We want to roll-out the next chapter of the HS Plus EV story soon. It’s likely to be called the ‘Excite’, because of the level of spec offered and where it sits within the lineup, and it will sit beneath the Essence which is our top-spec model,” Mr Robson said.

“It will be a more value-focused version of the HS Plus EV, but it will retain the same driveline as found in the Essence meaning it will offer the same 189kW mechanical package available now.”

Full specifications and pricing for the MG HS Plus EV Excite will be announced next month.

As noted by Mr Robson, the upcoming HS Plus EV Excite will feature the same powertrain as the top-tier Essence. That means the pairing of a 119kW/250Nm 1.5-litre four-cylinder turbo-petrol with a 90kW electric motor offering a combined system output of 189kW and 370Nm. The front-wheel drive model is equipped as standard with a 10-speed automatic transmission (with six ratios for the petrol engine and four for the electric motor).

MG quotes a 0-100km/h acceleration time of 6.9 seconds for its HS Plus EV range, the model’s electric motor drawing power from a liquid-cooled 16.6kWh battery which allows up to 52km of all-electric driving (WLTP). The model’s claimed combined cycle fuel economy figure is just 1.7 litres per 100km.

All MG passenger models are offered with a seven-year/unlimited-kilometre warranty in Australia.