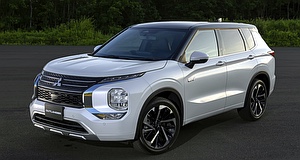 MITSUBISHI has significantly increased the performance and range of its mid-sized plug-in hybrid SUV, the Outlander PHEV’s new drivetrain providing the vehicle with between 83 and 87km of all-electric driving range, up from 54km in the outgoing model.

The new Outlander PHEV, which launches in its home market of Japan next month, is slated for arrival in Australian showrooms mid next year, joining the recently released new-generation petrol range.

Mitsubishi Motors Australia Limited (MMAL) says local pricing and specifications for the plug-in version of its Outlander will be revealed closer to the model’s local launch, however GoAuto understands that an increase of up to 40 per cent in the performance of the Outlander PHEV is expected, in part due to more efficient electric motors and a larger 20kWh battery (up from 13.8kWH).

A carryover internal combustion engine, the 2.4-litre four-cylinder petrol unit from the preceding model, soldiers on for the latest PHEV update.

Mitsubishi says the upgraded front electric motor benefits from a ‘booster’ function as part of numerous drive modes available in the new model: Normal, Tarmac, Gravel, Snow, Mud, Power and Eco. A one-pedal driving mode is also available, similar to that which debuted in the current Nissan Leaf.

Petrol range is increased due to the inclusion of a larger petrol tank (capacity not supplied), while the brand’s Super-All Wheel Control (S-AWC) adopts Active Yaw Control (AYC) for the rear axle to better split the torque between the axles as required and torque vectoring by brake (TVBB) is also included to split drive from left to right.

The Outlander PHEV is produced as a five- or seven-seater, rides on 20-inch wheels and is available with a two-tone paint scheme.

The system is also capable of using map data to automatically adjust vehicle speed for corners and “other circumstances on expressways” while automatically starting after the vehicle in front has moved on from standstill within 30 seconds.

“With our electrification technology – that delivers an exhilarating, eco-friendly ride, plus all-wheel control technology for safety and peace of mind in any kind of weather and road conditions – we are confident this new Outlander can make driving even more enjoyable and fulfilling.”

Mitsubishi added the original Outlander PHEV to its line-up in 2013 and says the electrified medium SUV had since sold more than 270,000 around the world by the end of 2020.

Both petrol and petrol-electric versions of the fourth-generation Outlander share their underpinnings with Nissan’s CMF-CD architecture, which also forms the basis of the X-Trail.