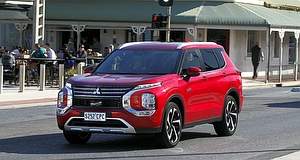 The new-gen plug-in medium SUV features a beefed-up power unit, larger-capacity high-voltage battery, stronger electric motors and a longer pure-electric range of up to 84km (on the NEDC test).

Mitsubishi says the rear electric motor features a new, integrated control unit occupying a smaller space than before, enabling the new Outlander PHEV to offer a three-row, ‘5+2’ seating configuration for the first time (on Exceed and Exceed Tourer versions).

The 2.4-litre petrol Atkinson cycle combustion engine acts primarily as an on-board generator (or range extender) in series hybrid mode, though is also capable of driving the front wheels directly in parallel hybrid mode, which is enabled at cruising speed or under high load driving situations.

Combined outputs of the petrol-electric hybrid power unit are 185kW and 450Nm and fuel tank capacity has increased from 45 to 56 litres.

Meanwhile, a new battery cooling system ensures optimum battery operation by using the vehicle’s air-conditioning unit, while an upgraded power drive unit is equipped with a voltage boost function that bolsters the performance of the front e-motor, while simultaneously reducing power consumption.

A reinforced differential employs a thicker carrier and stronger shaft and pinion, Mitsubishi claims, which allowing the new Outlander PHEV to turn up its regenerative braking capability.

Mode 2 and Mode 3 charging cables come as standard equipment across the range.

Mitsubishi’s Dendo Drive House is a bi-directional charging system that allows the Outlander PHEV to act as a mobile energy store, capable of recharging and discharging power whenever and wherever it is needed (with an approved bi-directional electric vehicle supply equipment).

Accessed via the vehicle’s CHAdeMO charging port, this capability allows the energy stored in the 20kWh high-voltage battery to be discharged; back into the grid (Vehicle-to-Grid), or to power a home or other property (Vehicle-to-Home) not connected to the grid (also known as ‘Islanding’).

ES and Aspire variants have a two-row, five-seat layout with 40:20:40 split-fold capability, while Exceed and Exceed Tourer have a three-row, ‘5+2’ layout with a redesigned folding mechanism.

Its interior is trimmed in cloth and equipped with a urethane multifunction steering wheel (with haptic vibration alert), a 12.3-inch digital driver display, push-button start and dual-zone air-conditioning.

One step up from the ES is the Aspire variant, which is distinguished by 20-inch alloy wheels with two-tone finish, LED fog lamps, silver skid plates (front and rear), silver roof rails and rear privacy glass.

Inside, the Aspire has a leather-trimmed steering wheel, combination seat trim, a power-adjustable driver’s seat, seating heating (driver and front passenger) and a roll-type cargo cover at the back.

The LED headlamps (with adaptive driving beam) are self-levelling and automatically activated (as are the windscreen wipers).

Exceed variants can be distinguished from lesser siblings by colour-coded lower body accents, B- and C-pillars with gloss black paint and a front tilt/slide panoramic sunroof.

Compared with the Aspire, the Exceed has a quilted-leather-trim and comes with the  5+2 seat layout, an electrically- adjustable front passenger seat with two-position memory for both front occupants and auto-tilt for the side mirrors.

Finally, the Exceed Tourer features bespoke interior and exterior finishes for added luxury and road presence. In addition to the Exceed, it comes with a two-tone exterior finish (Black Diamond with Deep Bronze or White Diamond with Black Mica), which is complemented by a two-tone high grade leather interior (black and saddle tan), as well as driver and front passenger seat massage function.

All Mitsubishi Outlander PHEV variants are sold with an eight-year/160 000 km drive-battery warranty and a 5-year/100,000 km manufacturer warranty, the latter of which may be eligible to be extended to 10 years/200,000 km if all scheduled services are done through the Mitsubishi dealership network.

Similarly, the 12 months of complimentary roadside assist can be maintained for up to 4 years if the vehicle is serviced by authorised dealers in accordance with the service schedule.