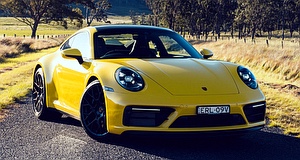 THE 992-series range grows with the launch of the new GTS, offering Porsche buyers a ‘sweet spot’ 911 with purist upgrades and subtle styling.

The line-up comes with increased grunt, a (significantly) more raucous soundtrack, better driving dynamics over previous GTS models, and in staying true to the purist theme, the manual ‘box lives on.

The unique blend of comfort and performance has forged a cult following for GTS models, particularly the 911 that first scored the badge a decade ago, widely considered as the pick of the bunch by Porsche owners.

The GTS is a 911 for purists that don’t want outrageous wings or aero, which on heavily policed Australian roads aren’t likely to offer a tangible benefit.

As a concept, Gran Turismo Sport came about nearly 60 years ago when works racing drivers Colin Davis and Antonio Pucci requested that their Porsche 904 be both comfortable and quick enough to win the gruelling 1964 Targa Florio endurance race in Italy.

Porsche engineers concocted the 904 GTS, which managed to achieve the ideal mix of performance and comfort, allowing them to take the win in seven hours and ten minutes of racing at the limit.

Australian buyers score the following five 911 GTS variants, with a mix of rear-wheel and all-wheel drive options, and choice of automatic or manual transmissions:

Existing GTS owners will feel at home in the latest generation 911 GTS, many of whom, we’re told, have been waiting for this release. It doesn’t disappoint.