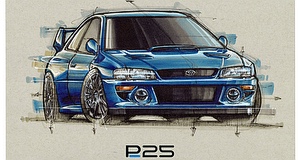 FOLLOWING on from the success of its bonkers Hunter off-road racer, British motorsports outfit Prodrive has announced that it will recreate one of the most desirable Subarus ever in the form of its Impreza WRX-inspired P25.

Coming 25 years after Subaru’s WRX rally debut – and with just 25 examples of the two-door coupe being produced – the aptly named P25 will pick up where Colin McRae’s Group A Impreza left off.

The “more powerful, lighter and better handling” P25 draws inspiration from the iconic 22B Impreza WRX STi as well as McRae’s WRC car to provide buyers with a road-going wide-body model powered by a 2.5-litre Boxer engine developing more than 298kW at the flywheel.

Power is delivered to all four wheels via a six-speed semi-automatic transmission. Prodrive has not specified whether the gearbox will be a competition-style sequential unit or more road-focused single-clutch automated manual.

Engineered by Prodrive technical director David Lapworth and styled by Peter Stevens – the creator of the original Group A Impreza – the P25 will feature the flared wheel arches, AP Racing brakes, wider, horizontal bonnet grilles and circular ‘fog’ lights of the original with retro wing mirrors and a considerable whack of carbon-fibre panelling.

“Twenty-five years since the first Subaru Impreza World Rally Car (WRC) made its winning debut on the stages of the World Rally Championship, the Prodrive P25 recaptures the essence of that very Impreza, while taking inspiration from the 22B, arguably the most iconic Impreza,” the company said in a statement.

“Modern technology ensures the P25 is more powerful, lighter and with better handling.

This time it will have a 2.5 litre flat four ‘boxer’ engine producing in excess of 400bhp, a six-speed semi-automatic paddle-shift gearbox and, due to extensive use of carbon-fibre, a lightweight chassis.”

Indeed, Subaru and Prodrive have a long and illustrious history when it comes to the Impreza WRX. The Banbury-based firm helped to set up 16 of the original 22Bs for competition use, the original cars now highly sought after by motorsports collectors.

“The original 22B Impreza is considered the most iconic of Subarus and is highly sought after,” said Prodrive chair David Richards.

“We wanted to enhance everything that made that car so special by applying the very latest technology to create our own modern interpretation of a car that’s established a place in motoring history.”

Mr Richards has confirmed the Prodrive P25 will sell for £552,000 ($A973,370) and that it will make its public debut at the Goodwood Festival of Speed this month.

Expressions of interest are now being invited via Prodrive’s website, with all 25 examples expected to be delivered to customers by the end of the year.