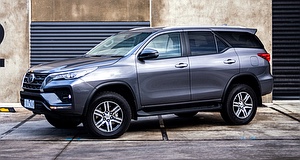 Most of the changes to the Fortuner centred around the inclusion of Toyota Connected Services telematics technology. Now standard across the Fortuner range, the safety-oriented tech provides owners the ability to request emergency assistance from a Toyota call centre via an ‘SOS’ button in the cabin.

Further, in the event of a serious impact, such as one resulting in airbag deployment, the system can automatically call the emergency services and relay the vehicle’s position.

It’s terrific peace of mind for family buyers and gives the Fortuner a clear advantage over many if its immediate rivals. In Crusade variants, that ‘safety factor’ is even further increased by the addition of blind-spot monitoring and rear cross-traffic alert on top of already standard AEB and lane departure warning.

Otherwise, the Fortuner is largely unchanged. It remains powered by the same 2.8 litre four-cylinder turbo-diesel engine that serves across the Fortuner, HiLux and LandCruiser Prado range, developing a useful 150kW of power and 500Nm of torque. Fuel economy is listed at 7.6 litres per 100km (ADR Combined).

All Fortuner variants are offered with four-wheel drive and are paired exclusively to a six-speed automatic transmission. A braked towing capacity of 3100kg is listed.

Despite its many positives, the Fortuner struggles to match its ute-based rivals on the Aussie sales ladder. To the end of June, year-to-date sales of the Fortuner sat at just 2683, 2219 fewer than the Ford Everest, 2318 behind the Mitsubishi Pajero Sport and 2644 less than Isuzu’s MU-X.

It also sits well behind Toyota’s segment leading LandCruiser Prado of which 12,978 units have been sold since the beginning of the year.