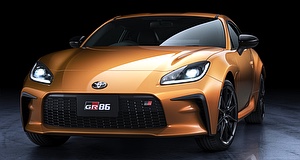 TOYOTA Australia is set to celebrate the tenth anniversary of its 86 sports coupe later this year with the release of a special variant fittingly dubbed GR86 10th Anniversary Edition.

Just 86 examples of the celebratory sportscar will be made available to Australian customers, the first of the GR86 10th Anniversary Edition to arrive “soon after the new-generation GR86 sports car is launched locally in September,” says Toyota Australia.

Special-edition GR86 variants are differentiated by a new orange paint colour and two-tone black and orange upholstery, while shoulder pads on the door trims will feature 10th Anniversary embroidery.

Toyota Australia says members of the Gazoo Racing Club will gain priority access for ordering one of the limited-edition models, and that members who register their interest in the GR86 10th Anniversary Edition will be “kept up to date with information regarding the (delivery) process”.

“Ten years ago, we launched the original Toyota 86 in Australia, creating a following for those wanting a sports car that blends reliable performance and great value,” said Toyota Australia vice president of sales, marketing and franchise operations, Sean Hanley.

“With the new generation GR86 just around the corner, what better way to commemorate a decade of our exciting coupe than with this special 10th Anniversary model.”

Mr Hanely said the Toyota 86 revitalised the brand’s performance credentials and set the scene for the introduction of the Toyota Gazoo Racing brand with nearly 22,000 examples of the 86 finding their way into the driveways of Australian buyers.

When the new generation GR86 launches in September, it will bring what Toyota Australia says are a raft of dynamic improvements including a more powerful engine, optimised handling and a driver-focused cockpit.

The GR86, which was originally slated for Australian delivery in the second half of 2021, will be powered by the same engine found under the bonnet of its twin-under-the-skin Subaru BRZ, but developing 176kW and 250Nm, 3kW/1Nm more than the Subaru and 21kW/38Nm more than the outgoing GT86.

Both six-speed manual and automatic transmissions will be offered on the GR86 but Toyota has yet to fully advise the model variant line-up or pricing for the Australian market. For reference, the Subaru BRZ retails from $38,990 plus on-road costs.

As reported by GoAuto previously, the delay in getting the GR96 into local showrooms was part of a strategic plan on Toyota Australia’s behalf that aimed to give it more development time over its BRZ cousin.

“The launch of this vehicle was always planned for this time, so that the Toyota GR86 could benefit from some additional development time, which was used to make it a slightly more focused vehicle on track,” a Toyota spokesperson told GoAuto.

“We believe this difference will ensure that a good number of our interested customers will wait to experience the difference for themselves, before deciding which vehicle (GR86 or BRZ) is best suited to their needs.”

Though both cars will still share their sheetmetal, engines, and the bulk of their interior furniture, just like the first-generation BRZ and 86 did, the under-the-skin differences will be far more significant this time around.

While the precise nature of these differences is not yet known, GoAuto understands that the suspension of the GR86 is comparatively firmer, with less body roll and a tauter feel to make it feel sharper on road and track. The BRZ, meanwhile, is set up for more sedate country-road touring rather than occasional track days.

There are also some detail changes to components like suspension arms, while geometry settings, steering calibration and throttle mapping may also differ between the two cars.

More information will be made available closer to the Australian launch of the GR86 in September.