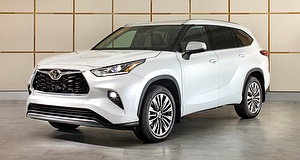 TOYOTA has confirmed an engine change for the Kluger large SUV that will adopt a 2.4-litre turbo petrol four cylinder out of the Lexus NX350 as a replacement for the existing 3.5-litre naturally aspirated petrol V6.

It will be offered across all variants – and in conjunction with two-and all-wheel drive configurations in the updated range and is rated to tow up to 2200kg (braked), 200kg more than current Australian-spec models.

The oversquare Toyota/Lexus T24A-FTS engine displaces 2393cc and combines direct and port injection with a twin-scroll turbocharger to output up to 205kW at 6000rpm and 430Nm between 1700-3600rpm in some applications.

That additional torque is available lower in the rev range, meaning improved driveability and easier towing with the smaller capacity engine.

In the United States, there is no fuel consumption benefit to the downsized engine but if Toyota follows Lexus in quoting consumption figures using 95 RON premium unleaded, it could match or near the 8.1 litres/100km combined-cycle claim of the Lexus NX350 with the same engine and all-wheel drive (the V6 Kluger uses 8.9L/100km on 91 RON regular unleaded).

Toyota is switching engines because toyota has announced an end to V6 engines in the United States market, where Klugers are built for Australia.

Apart from the potential for decreased emissions, the 2.4L engine is lighter than the V6 and is easily packaged within Kluger’s Camry-based chassis.

Klugers fitted with the new engine will be available in the first quarter of 2023, alongside the popular 2.5-litre hybrid petrol electric AWD.

“With superb torque and response, we expect the addition of this strong new engine will make the popular Kluger family SUV an even more enticing prospect for buyers,” Mr Hanley said.

The 2.4-litre engine employs a range of sophisticated technologies, including a newly developed turbocharger and optimised fuel injection system.

A choice of front-wheel drive and (mechanical) all-wheel drive will be available with power to be channelled through an eight-speed conventional automatic transmission.

It is not clear whether the more advanced torque vectoring AWD associated with the Kluger V6 Grande will find its way onto 2.4L Kluger.

The new powertrain will be available across the range in GX, GXL and Grande guise, and will be offered alongside the economical Hybrid AWD vehicles.

Along with the new powertrain, the Kluger family SUV range will gain a number of range-wide updates, offering customers increased safety and convenience.

A 7.0-inch colour multi-information display replaces the 4.2-inch display on GX, while GXL and up moves from an 8.0-inch multimedia display to an expansive 12.3-inch touchscreen.

More information will be forthcoming closer to the introduction of the new 2.4-litre Turbo Kluger.