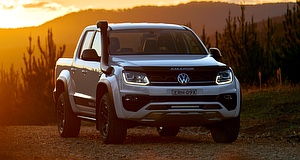 THE Volkswagen W580X is now officially on sale. Joining other Walkinshaw-enhanced Amaroks including the W580 and W580S and priced from $78,890 plus on-road costs – or $1500 more than originally quoted – just 600 examples of the limited-edition dual-cab ute will be sold.

Volkswagen says the off-road-focused variant is engineered to face the toughest Australian conditions and with 190kW and 580Nm of V6 turbo-diesel power plus a locally tuned suspension setup, will excel on a range of surfaces including fire trails, hard-packed gravel roads and hill climbs.

“The partnership with Walkinshaw continues to bring out the best of German and Australian engineering that remains a flagship Amarok hallmark,” Volkswagen Commercial Vehicle brand director Ryan Davies said of the Argentinian-made ute.

“The current generation Amarok is widely loved for its V6 power and towing and praised by media for still setting the on-road benchmark for driving dynamics. The W580X retains this high watermark while adding authentically Australian elements perfect for the most rugged local off-road conditions.”

Volkswagen has sold 1489 Amaroks across the first four months of this year, accounting for 2.4 per cent of the ever-popular 4×4 utility segment. The Amarok ranks ninth within the segment.