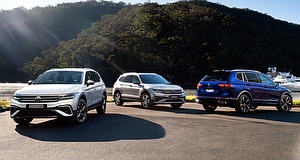 VOLKSWAGEN’s newly-refreshed Tiguan Allspace range now numbers seven different variants. Encompassing the entry-level 110 TSI Life all the way up to the all-wheel drive 147 TDI R-Line, the seven-seater range has been both rationalised and expanded.

The previous range was topped by the Elegance trim level with the optional R-Line pack, but the success of that package prompted VW Australia to make it a standalone variant.

According to VW Australia’s general manager of corporate communications, Paul Pottinger, the supply of new new-vehicle stock has been an ongoing battle for the Sydney-based importer.

“We’ve so seldom (in either five or seven-seat configuration) had anything like adequate supply. The order banks are overflowing.”

The pandemic has affected nearly half of the Allspace’s model lifecycle in Australia, which has made life more difficult for the company.

“Supply has been – how can I put this diplomatically? – screwed. It’s about as bad a supply as it gets so it’s hard to have any real basis for comparison. We’ve had such sporadic volume for such a long time. We know from buyer intent and orders that the 162 is still overwhelmingly – as it has been since its inception – the first choice.”

VW Australia’s product manager for the Tiguan and Tiguan Allspace, Glenn Reid, continued the theme, saying that the 162-engined Tiguans have been the greatest challenge to procure.

“We’re having issues with leather and electric seats, the click-clack lights, the Matrix LED headlights, all of these high-spec features.”

However, Mr Reid and his team has spotted a way to get the 162 into showrooms: by reaching for the Adventure badge previously used on the short-wheelbase Tiguan.

“We were unable to build the R-Line or Elegance in a number that was suitable for our market and we really wanted to get that driveline back into the showroom as quickly as possible.

“So we came up with the idea of doing a Life-grade version of that car, but we wanted to make it something special with the Adventure. So, we basically kind of mirrored a lot of the specification of our Pro Line, which is a police pursuit car. It just so happened that a lot of the elements we had in that car suited the Adventure concept really well.”

While there is much from the Pro Line specification, Adventure owners will miss out on the police front seats, which Reid says is “more OH&S friendly”, with the civilian version featuring the cloth seats from the Life.

“The Adventure has things like extra bash plates underneath and we’ve got the larger boot with five seats instead of seven, which is a really exciting thing. We’ve got the larger alternator and bigger battery so you can power your camping gear equipment at the campsite.”

While based on the Pro Line, the Adventure is missing a few of the cop-spec features.

“There are some differences [to the Pro]. This car has 17-inch alloys (instead of 18s) and that’s to allow fitment of snow chains legally.

“It’s exciting for us because we have these optional packages that the customer can choose from – and they get one of these accessory packages for free and one of them is snow chains. We actually got genuine VW snow chains for the first time. It’s cool to be able to offer that.”

The Tiguan Allspace Adventure will arrive later in the year with a $51,900 price tag.

“Without question it’s the most popular [engine] and being able to build them in a substantial quantity and get them here really quickly was the driving force behind this car.”