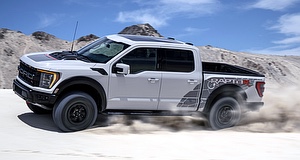 FORD Performance has ripped the covers off its supercharged V8 F-150 Raptor R in the United States this week, the hardcore, off-road focussed pick-up truck promising to be its fastest, most powerful and most extreme Raptor yet – just don’t expect the model in Australia any time soon.

Inspired by the extreme desert-racing trophy trucks that compete in the Baja 1000, and designed and engineered by Ford Performance, the F-150 Raptor R is powered by the same 5.2-litre supercharged V8 found under the bonnet of the Mustang Shelby GT500, delivering an impressive 522kW of power and a staggering 868Nm of torque.

Ford last offered a V8 engine in a Raptor model back in 2014.

Ford says the “torque dense” V8 is optimised for off-road performance and durability with a new pulley for improved low-end and mid-range response, stainless steel exhaust manifolds, a bespoke oil cooler and filtration system, a deeper sump, and a wider air intake with conical filter.

In keeping with its desert-racer lineage, the F-150 Raptor R is suspended by five-link rear suspension with extended trailing arms, a Panhard rod and 610mm coil springs. Damping comes courtesy of Fox Live Valve electronically controlled shocks. Wheel travel is listed at 330mm up front and 358mm at the rear. Front spring rates are upped five per cent over those found in the standard F-150 Raptor while ground clearance – increased in part by factory-fitted 37-inch tyres—is listed at 333mm.

“(The) Raptor R is our ultimate Raptor. When customers experience Raptor R in the desert and beyond, it will make the hairs on the back of their necks stand up – and they’ll love every second of it,” said Ford Performance chief engineer Carl Widmann.

“We’ve heard our customers demanding the sound and power of a V8 back in Raptor. That’s not something we’re going to rush. This supercharged 5.2-litre V8 is the ideal fusion of high-density power paired with the third-generation Raptor’s all-new rear suspension and shocks to deliver a one-two punch that goes far beyond the sum of its parts.”

The F-150 Raptor R is denoted visually by a larger, more aggressively styled power dome on the bonnet, F-O-R-D lettering on the grille, and black-finished bumpers, grille and fender flares. The model is further distinguished by Ford Performance-exclusive Code Orange accents including ‘R’ badging on the grille, power dome and tailgate, and a special graphics package on the rear fenders.

The F-150 Raptor R will be available in eight colours and is available from order in the United States now.

Locally, Ford Australia told GoAuto that it has no plans to introduce Raptor versions of its F-150 pick-up truck.

“We have no news to share on any plans to introduce the F-150 Raptor R to Australia,” said Ford Australia and New Zealand communications director, Matt Moran.

GoAuto understands Ford Australia will reintroduce base variants of the F-150 to local showrooms by mid 2023, the range to be converted from left- to right-hand drive by Thailand-based engineering firm RMA Automotive Holdings.

Globally, Ford’s F-150 range continues to be the subject of a production shortfall.

Semiconductor shortages forced the manufacturer to suspend the production of its pick-up truck range earlier this year, the popularity of both conventionally powered and electric models (known as the F-150 Lightning) placing demands on production Ford is still struggling to meet.

Indeed, Ford Australia is struggling to keep pace with orders of its newly introduced Ranger.

The latest model received over 17,000 orders when Ford opened the order books earlier this month – including 4000 Ranger Raptors – creating unprecedented demand and pushing waiting times for the new model out by several months.

As reported by GoAuto recently, Ford Australia has added resources to its website to provide customers and prospective buyers with up-to-date vehicle availability information.

The initiative was prompted by strong interest in the Ranger, Ranger Raptor and Everest, as well as global semiconductor and pandemic-related supply chain challenges, which mean some customers will face extended waits.

The web page is updated regularly to provide customers with up-to-date information on vehicle supply and answers common questions.

“We know prospective buyers and intending customers want accurate information and transparency about wait times and when their vehicle will arrive,” said Andrew Birkic, President and CEO, Ford Australia and New Zealand.

“This dedicated webpage will keep them informed but we’d also encourage customers to stay in contact with their dealers about the status of their vehicle.”