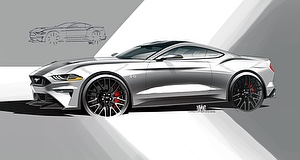 FORD is reportedly readying its seventh-generation Mustang for debut at the North American International Auto Show in Detroit.

The all-new model – codenamed S650 – is tipped to enter production in early 2023 and will likely feature EcoBoost and V8 petrol drivelines familiar to the existing range. Ford’s marketing imagery also suggests the model will continue to be offered with a six-speed manual gearbox.

Ford, however, is tight-lipped on the model’s appearance, which it says it will not unveil until the September event.

The current-generation Mustang, which began production in 2015, has been a segment leader in the United States. Sales of the aging model have only begun to wane last year as news of a replacement became known, falling 14 per cent to 52,414 units.

Since the sixth generation Mustang debuted, Ford’s iconic sports car has spawned a wide range of variants, including the model’s first four-cylinder offering, and revival-style nods to Blue Oval pony car royalty such as the Shelby GT500 and Mach 1.

Ford said it will continue to build the Mustang at its recently upgraded facility in Flat Rock, Michigan, as part of a broader manufacturing investment in three Midwest states. The model will reportedly share the same eight-year lifecycle as its predecessor.

Locally, new orders for the Ford Mustang are currently suspended as the manufacturer endeavours to address microprocessor shortages plaguing the model’s production. As a result, year-to-date sales of the Mustang sit at just 1792 units to the end of June, a decrease of 57.6 per cent over the same time last year.

Australian retail pricing for the MY2022 Ford Mustang range – which was increased by up to $1100 earlier this month – begins at $52,590 plus on-road costs for the 2.3-litre four-cylinder turbo manual coupe and tops out at $75,990 plus ORCs for the 5.0-litre V8-powered automatic convertible.