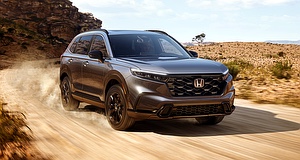 HONDA has revealed its largest-ever CR-V this week, the sixth-generation SUV expected to make its local debut with petrol and hybrid drivelines sometime in the second half of 2023.

The tailgate is flanked by L-shaped tail-lights in a nod to the outgoing model.

Accompanying the US press information, Honda released images of its Sport and Sport Touring grade CR-V variants each with a dark-themed grille, body mouldings, vents, alloys and wing mirror caps.

The influence of the new Civic is likewise evident inside the CR-V’s cabin with a strong horizontal theme, floating infotainment screen (7.0- or 9.0-inch depending on model grade) and familial instrumentation visible.

But it’s the higher specification model that is likely to reflect what will be sold in Australia. The brand’s approach to recent model launches has showed a clear preference towards offering only higher-trim grades with more premium content, and with petrol and hybrid engine offerings available.

Under the bonnet we expect the CR-V to offer drivelines familiar to those offered elsewhere in the range.

Honda’s US release details a base turbocharged petrol engine displacing 1.5-litres with 142kW of power at 6000rpm and 243Nm from 1750-5000rpm paired to a continuously variable transmission (CVT) and offered in front- or all-wheel drive configurations.

A direct injection Atkinson cycle 2.0-litre petrol assisted by two electric motors is also available with 152kW of power and 335Nm of torque, again with the availability of all-wheel drive. The figures make it the most powerful production CR-V ever.

The CR-V will utilise the same modular Honda Architecture (HA) platform that underpins the eleventh-generation Civic and as such rides on a MacPherson strut (front) and multi-link (rear) suspension arrangement.

Braking is by discs all round with alloy wheel sizes of 18 to 19 inches in diameter that are shod respectively with 235/60 and 235/55 profile tyres.

Body torsional rigidity has improved by 15 per cent over the outgoing model while a new variable ratio steering rack is said to provide greater feedback and more accuracy than before.

Safety technology will include the full suite of Honda Sensing safety and driver assistance technologies, front- and rear-facing cameras, as well as knee and side-impact airbags.

Both CR-V Sport and Sport Touring grades include hill descent control as standard for the first time.

Honda says its new CR-V “debuts a rugged and sophisticated design” and a more “sporty and more capable driving experience.” It is understood the model will be offered in both five- and seven-seat format in the Australian market.

Cargo capacity grows to 1028 litres in both variants, the petrol offering boasting an additional 85 litres beneath the load floor. The 60:40 split second row of seats allows the CR-V to accommodate as much as 2166 litres of cargo space all told.

Honda says both the passenger and cargo compartments are the roomiest in the history of the CR-V.

As reported by GoAuto previously, the increased size of the new CR-V will allow Honda not only to offer a more spacious mid-size model to its loyal customer base, but to also make way for the arrival of the new ZR-V, which will slot between the HR-V and CR-V in the brand’s SUV portfolio.

Honda Australia told GoAuto News that the new CR-V is still too far away for it to confirm local specification and launch timing but says the model should be on its radar by this time next year.

“Although the next-generation CR-V will initially launch this summer for the left-hand drive domestic North American market, launch timing for Australia is yet to be confirmed as it is more than 12 months away,” said a Honda Australia spokesperson.

Despite its age, the current Honda CR-V continues to rate as one of the best-selling SUVs in its class.

Year to date sales figures place the CR-V in eighth place within the Medium SUV under $60K segment with 4022 sales to the end of June 2022.