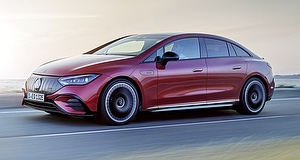 WHILE the upcoming Mercedes-AMG EQS53 4Matic+ will sit at the pinnacle of Mercedes-Benz Cars Australia’s line-up of battery-electric passenger vehicles, its smaller EQE sibling is heading here too, and the range is likely to be headlined by a 498kW/1001Nm Affalterbach-tuned variant.

Mercedes-Benz Cars Australia has a battery of all-electric models lined up for local introduction this year, from the crossover-flavoured GLA small SUV and its more squared-off GLB medium SUV sibling, right up to a brace of commercial vehicles.

However, motoring enthusiasts are most eagerly anticipating the arrival of the S-Class-sized EQS battery-electric limousine and its smaller sibling, the EQE, which arrive in second half of the 2022, possibly closer to the end of the year.

The Three-pointed Star recently unveiled the Mercedes-AMG EQE 43 4Matic and EQE 53 4Matic+, the latter of which will be available with an AMG Dynamic package and, although the Australian EQE line-up was yet to be finalised, Mercedes-Benz Australia spokesman Ryan Lewis confirmed it was the range-topping 53 4Matic+, and not the 43 4Matic, that was heading here.

As opposed to some of its EQ model siblings, the EQE is not based on a conventional model, but rides on ‘Benz’s EVA platform, which also underpins the EQS. It’s slightly shorter, but notably taller and wider than its E-Class stablemate, which means it is also much more spacious inside.

As opposed to their non-AMG siblings, both the EQE 43 4Matic and the 53 4Matic+ have dual electric motors (one positioned at each axle) paired to a 90.6kWh battery. However, whereas the former produces 350kW and 858Nm, the latter delivers 460kW and 950Nm – in standard spec.

With the AMG Dynamic Plus package specified, the EQE 53 4Matic+ is claimed to accelerate to three figures in 3.2 seconds and top out at 240km/h. It has an 11kW onboard charger and fast charging (using a 170kW) outlet will result in 180km of range being added in just 15 minutes.

From a cosmetic point of view, the newcomer can be distinguished by its sporty bumpers, stripey black closed “grille”, 20-inch multi-spoke alloys, as well as sporty bumpers and side skirts.

The EQE’s cabin is dominated by the expansive MBUX Hyperscreen that spans the width of the dashboard and incorporates three screens (two of which is of the touch-input variety) under one uninterrupted glass surface.