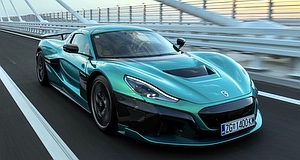 WEARING Croatian number plates, Rimac’s brutally powerful Nevera has this week broken cover at a bridge opening ceremony in the south of the Baltic country.

The 1430kW/2300Nm hypercar car rolled off Rimac’s production line a week or two back and has stunned onlookers at the opening of the equally stunning Pelješac bridge, a 2.4km long suspension construction connecting Croatia’s southern areas and the rest of the country… with a slice of Bosnia and Herzegovina in between.

Apart from construction vehicles, Nevera, the focus of much Croatian pride, became the first ‘car’ to cross the new span.

That national pride in Nevera is heightened by the fact that it is Croatia’s first car designed, engineered, and manufactured there to gain homologation for the EU and US markets.

Plus, the small fact that it is a multi-million-dollar “sledgehammer” hypercar claimed to be the fastest and quickest of the genre currently available thanks to a four-motor powertrain with torque vectoring capable of launching Nevera from 0-100km/h in under two seconds.

At the wheel for the bridge drive was Nevera’s chief engineer, Matija Renić, who has a finely-honed appreciation of the scale of the engineering challenges that had to be overcome in constructing the new bridge.

He has been part of the Nevera project from day one and has overseen the development of the striking, low-slung vehicle for the last two years.

Rimac says they are equipped to produce only 150 units a year because Nevera is bespoke and hand built. It comes out of a purpose-built facility in Croatia.

The pure-EV Nevera was five years in the making running through 19 prototypes, 45 crash tests and 1.6 million development hours.

The potent powertrain is fed from a T-shaped, 120kWh battery pack that resides in the centre tunnel of the car and is good for a claimed 500km plus range in normal driving mode.

Engineers cleverly designed Nevera with a pair of two-speed gearboxes for the rear axles which means at high speeds it will become rear-wheel drive.

In testing under controlled conditions, Nevera (the name for a sudden tempest in Croatian) has been clocked at 1.85 seconds for the 0-100km/h sprint with a top speed expected to exceed 400km/h.

Technology from Rimac Nevera is likely to filter through into vehicles produced by Rimac shareholders that include the likes of Porsche (VW Group including Lamborghini, Bugatti and Audi), Hyundai and Pininfarina.

GoAuto understands that Lamborghini is not far behind Bugatti in the queue for the Croatian-developed EV technology and Hyundai has plans for an N performance car using that same technology.

The Rimac Group was first established by Mate Rimac in Croatia in 2009 and headquartered on the outskirts of Zagreb. It currently employs more than 1700 people and is undertaking the construction of one of the largest R&D facilities in Europe, the so-called Rimac Campus, home to Bugatti Rimac and Rimac Technology.

The facility will account for 50 Neveras a year along with and tens of thousands of battery units, electric motors and other EV components for Rimac Technology clients.

Mate Rimac, CEO of The Rimac Group, said: “From the very beginning, the Rimac Group has been proud of its Croatian roots. Our Nevera, is named after a type of storm found off the Croatian coast and its design language incorporates subtle nods to the cravat (necktie), which was popularised by members of the Croatian army in the 17th century.

“We love seeing Croatia further develop and grow, hence we’re proud to have taken part in the opening of the Pelješac Bridge – another project contributing the future of this country.”

The Pelješac Bridge opening ceremony was capped in the evening by Nevera’s first (silent) drive across, opening it to normal road traffic.