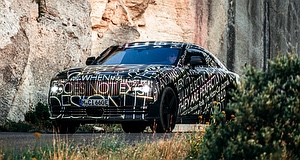 THE worm has turned at Rolls-Royce Motor Cars which is going full electric by 2030. It is a promise made by Rolls-Royce CEO, Torsten Müller-Ötvös who recently said, “Rolls-Royce will go electric, starting this decade, and by 2030 will be a fully electric motor car brand.”

Despite dabbling in electric propulsion with two experimental vehicles more than a decade ago, the icon of ICE (Internal Combustion Engines), Rolls-Royce, has been building high-end luxury cars with petrol engines for nearly 120 years making the step towards BEVs a real game changer.

Information received at GoAuto this week informs that Rolls-Royce’s new BEV-mobile, called the Spectre, is 40 per cent along the way to completion.

Validation over the past months has seen Roll-Royce test and development engineers shift their focus from the extreme cold conditions of Arjeplog, Sweden, to a warmer location that more closely reflects the Spectre super coupe’s everyday use: cruising the French Riviera.

The German-owned, British icon arrived late at the EV table and only commenced testing an EV “mule” in September last year.

To ensure the Spectre is “first and foremost” a Rolls-Royce, it has been undergoing the most demanding test program ever conceived by Rolls-Royce, spanning 2.5 million kilometres, simulating on average more than 400 years of use for a Rolls-Royce… an extraordinary undertaking in the auto-making game.

While Rolls-Royce has built a reputation for creating super-luxury motor cars using petrol ICE, and has been comparatively slow in embracing electric propulsion, the concept of electrification is familiar to the brand.

Henry Royce began his working life as an electrical engineer and dedicated much of his career to creating internal combustion engines that simulated the characteristics of an electric car – silent running, instant torque and the sensation of one endless gear.

This philosophy was underlined in 1906 when Charles Rolls himself drove a 1900 electric car named the Columbia. After the drive, he made a prophecy: “The electric car is perfectly noiseless and clean. There is no smell or vibration. They should become very useful when fixed charging stations can be arranged.”

Fast forward to 2022 and according to Torsten Müller-Ötvös, “It is no exaggeration to state that the Spectre is the most anticipated Rolls-Royce ever.”

“Free from the restrictions connected to the internal combustion engine; our battery-electric vehicle will offer the purest expression of the Rolls-Royce experience in the marque’s 118-year history.

“This latest testing phase validates a suite of advanced technologies that underpin a symbolic shift for Rolls-Royce as it progresses towards a bright, bold, all-electric future.

“This will secure the ongoing relevance of our brand for generations to come,” said Mr Müller-Ötvös.

From a more mechanical perspective, Dr Mihiar Ayoubi, Director of Engineering, Rolls-Royce Motor Car says, “The Spectre unlocks the extraordinary potential of integrating a fully electric powertrain into our Architecture of Luxury platform.”

“From this engineering starting point, our testing and refinement processes combine empirical data and human experience, intuition and insights acquired over more than a century to refine the motor car’s driving dynamics and character.

“In co-ordinating this orchestra of systems with precisely defined responses to driver inputs and road conditions, made possible by the latest software and hardware developments, the Spectre delivers the Rolls-Royce experience in exceptionally high definition.”

The Spectre draws from a 2011 fully electric Experimental Phantom concept named 102EX followed by 103EX, a dramatic design study that anticipated an electric future for the marque. The two-door Spectre channels the Phantom Coupé, its spiritual successor and will be the first all-electric super-luxury car with continental touring central to its proposition.

Forming a crucial part of the Spectre’s 2.5-million-kilometre global testing program, a total of 625,000km will be driven on and around the French Côte d’Azur, in country regions and include track time at a former GP circuit.

Bespoke electronic architecture is used with a fully electric powertrain backed by “unprecedented” computing power and application of advanced data-processing technologies. The Spectre is the most connected Rolls-Royce ever. It features 141,200 sender-receiver relations and has more than 1,000 functions and more than 25,000 sub functions. This is around three times more sender-receiver signals than a typical Rolls-Royce.

The dramatically increased intelligence of the Spectre’s electronic and electric powertrain architecture enables a free and direct exchange of detailed information between these functions with minimal centralised processing.

To unlock the potential of this technology, Rolls-Royce software engineering specialists developed a decentralised intelligence for the Spectre. This is based on data being processed closer to its source rather than being handled in its entirety by a single central processing unit.

By sending more sophisticated data packets – that not only describe a variable but propose a response – the car’s reaction time is significantly faster and more detailed. This advanced technology sees much of the development of the Spectre pivot from the workshop into the digital space.

The super coupe gains new suspension technology that ensures the Spectre delivers Rolls-Royce’s hallmark ‘magic carpet ride’. It uses a suite of new hardware components and leverages the Spectre’s high-speed processing capabilities to produce a sophisticated electronic roll stabilisation system which reads the road surface ahead and links to the satellite navigation system to alert the Spectre of upcoming corners.

The system can automatically decouple the Spectre’s anti-roll bars, allowing each wheel to act independently.

Rolls-Royce is targeting the fourth quarter of 2023 for the first customer deliveries of its all-new Spectre.