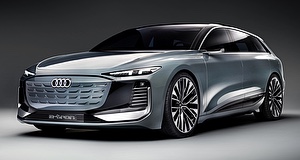 ABOUT a year after revealing the A6 Sportback e-tron concept, Audi has unveiled an arrestingly styled estate version of the future model, which is underpinned by a new modular BEV platform that the Ingolstadt-based firm is co-developing with Porsche.

The first Audi production vehicles built on the VW Group’s Premium Platform Electric (PPE) architecture will be unveiled next year and the firm says the A6 Avant e-tron concept, finished in a Neptune Valley grey hue, offers “clues about how dynamic and elegant the electrically powered luxury class from the four-ringed brand will look”.

“With the Audi A6 Avant e-tron concept, we are offering a completely tangible look at future production models on our new PPE technology platform,” said Audi board member for technical development, Oliver Hoffmann.

“We’re not just electrifying the Avant’s successful 45-year history. What we want most of all is to use technical skills to add an exclamation point. This includes 800-volt technology, 270 kW of charging capacity, and a WLTP range of up to 700 km.”

The A6 Avant e-tron concept is 4960mm long, 1960mm wide and stands 1440mm tall, making it slightly longer, wider and lower than the current-generation model.

With its dynamic proportions and sinuous lines, including the Avant rump that is so characteristic of the brand, it is clear the concept’s shape was refined in a wind tunnel.

Audi says the Avant’s drag coefficient of 0.24 – 0.02 higher than last year’s Sportback concept – is “unprecedented in the electrified C-segment”.

The front of the wagon concept is dominated by a large enclosed single-frame grille, which is bordered at the bottom by deep air intakes. The flat headlights (with Digital Matrix LED and digital OLED technology) extend into the sides of the laterally sweeping front end and underscore the horizontally aligned body architecture.

The flanks feature sleek, camera-based virtual exterior mirrors at the bases of the A-pillars, while the wheel arches – housing almost cartoonishly large 22-inch wheels – are connected by a black inlay that is said to be a specially sculpted battery area above the side skirts.

LED projectors are built into each side of the body to create dynamic lighting effects that “greet occupants with messages in their own language”.

The wagon’s gently sloping roof arch with slanted D-pillar is typical of Audi Avant window design, while the rear-end is highlighted by a spoiler with coloured trim and a diffuser with a pair of generously sized air outlets integrated into the bumper.

A pair of electric motors – one on each axle, hence the quattro all-wheel drive – delivers combined outputs of 350 kW and 800 Nm and are said to propel the flagship version of the A6 Avant e-tron from zero to 100km/h in “well under 4.0 seconds”.

By virtue of the 800V charging technology, the concept’s battery – said to have a capacity of “around 100 kWh” – can be recharged at up to 270kW DC.

Apart from a claimed single-charge range of up to 700km, Audi says about 300km of range can be added in 10 minutes when the vehicle is plugged into a suitable rapid charging station.

Suffice to say, the A6 Avant e-tron concept’s cabin is capacious, with Audi claiming the extended wheelbase allows a “longer interior and more legroom in both rows of seats”.

In addition, the underfloor positioning of the battery pack and the absence of a traditional transmission tunnel result in an even roomier interior.

Although there are die-hard fans of the Avant body shape, it remains to be seen if the production version of the concept will be offered in all markets, let alone Australia.

However, Audi also said it planned to utilise the scalable PPE platform for upcoming small and medium models, which have been the highest-volume segments for the German premium brand (courtesy of the A3 and A4) for several decades.

In that sense, the A6 Avant e-tron is indeed a harbinger of what’s to come.