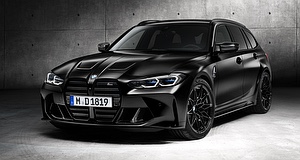 BMW Australia has announced that it will introduce its M3 Touring (wagon) to Australia from the first quarter of 2023.

Offered exclusively in Competition guise locally, and with a blistering 375kW/650Nm turbocharged six under the bonnet, the M3 Touring can clear the standard sprint in 3.6 seconds and hit 200km/h in just 12.9 seconds. Top whack is listed at 280km/h.

The latest BMW M3 Touring – which is cued to make its public debut at the Goodwood Festival of Speed this week – launches as the Bavarian marque continues its 50th anniversary celebrations of the sporting M division.

To date, the brand has released celebratory models including the M4 CSL and iX M60 and will later this year reveal an all new M2, tipped to be the most powerful ever built.

Australia continues to be among the world’s leading markets for BMW M cars with one in five BMW’s sold wearing an M badge. It is expected the M3 Touring will further that tradition, BMW saying the model will offer a winning combination of performance, practicality, dynamic flair, and agility.

Up front, the M3 Touring’s TwinPower Turbo 3.0-litre inline six-cylinder engine features a lubrication and cooling system designed with track use in mind, and an M-specific exhaust system with electrically actuated flaps to adjust sound levels to the driver’s preference.

The powerplant is paired as standard to an eight-speed M Steptronic automatic transmission with three gearshift programs or full manual mode, and channels power to the road via BMW’s M xDrive all-wheel drive system and Active M rear differential.

Electrically adjustable M Sport seats with memory function and Merino leather come as standard while M Carbon sport seats are offered optionally. The practical rear space of the M3 Touring offers a 40:20:40 folding rear bench and a cargo capacity of between 500 and 1510 litres (accessed via an electric tailgate).

The new BMW M3 Touring will arrive in Australia in Q1 next year with full pricing and specifications to be confirmed in the lead up to its launch.