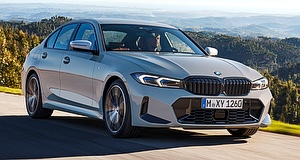 The key cosmetic updates feature at the front of the 3er. Apart from slimmer LED headlights (with clear contours and daytime running lights arranged in an inverted L shape), the space between the revised kidney grille (now with double bars) and the central air intake has been educed by the updated bumper design, which also features black high-gloss side intakes.

Adaptive LED Headlights, which are fitted as standard on the Australian-delivered BMW M340i xDrive Sedan, are identifiable by the blue accents inside their covers, while the rest of the 3 Series LCI variants receives full LED headlights with high-beam assistant.

As for the rear bumper, it features a higher proportion of surfaces painted in the body colour, which, in combination with slim light units and flared rear wheel arches accentuate the width of the 3 Series’ rear end. Anoraks will note that the exhaust system’s tailpipe finishers now measure 90mm or 100mm in diameter (depending on engine variant).

The M340i xDrive can be distinguished by its kidney grille in mesh design and trapezoidal tailpipe trims for the exhaust system, as well as M exterior mirror caps in black high gloss.

Inside, the new-look 3 Series now features BMW Curved Display, which already features on the i4 eDrive40 and M50, the latter of which GoAuto recently reviewed (see link below)

The BMW Curved Display effectively supersedes the traditional cowled instrument binnacle and adjacent infotainment touchscreen and it’s likely to be implemented throughout the brand’s line-up – the 2 Series Coupe is reported to be earmarked to receive it next.

The unit combines a 12.3-inch digital instrument display and a 14.9-inch iDrive touchscreen into a single, high-resolution panel. The iDrive, replete with extended BMW Intelligent Personal Assistant abilities, is powered by BMW Operating System 8; it enables the number of buttons and controls to be significantly reduced in favour of touch and voice inputs.

Meanwhile, the eight-speed Steptronic transmission now features a selector instead of a conventional lever. It is positioned in the control panel on the centre console along with the Start/Stop button, iDrive Controller, Driving Experience Control buttons, parking brake etc.

The functions of the automatic climate control (with three-zone adjustment) are no longer operated via fascia buttons, but by voice commands or touch inputs to the control display.

The My BMW App acts as a universal digital interface between the driver and vehicle and for controlling the charging process for the high-voltage battery of the 330e plug-in hybrid.

Drivers can use the BMW ID for individualising the user experience and further improved smartphone integration with Apple CarPlay and Android Auto. The BMW ConnectedDrive Upgrades function keeps the new 3er’s software updated via “over the air” downloads.

BMW AG has sold 16 million units of the 3 Series since the nameplate debuted four decades ago and today, it accounts for 14 per cent of BMW’s vehicle sales worldwide. In fact, more than 1.1 million of the G20 and G21 3 Series have been sold since 2019 alone.

In Australia, more than 137,000 new 3 Series units have been sold since VFACTS sales-data reporting commenced in 1991. The medium-car range accounted for 16 per cent of BMW Australia’s total sales volume for the 2021 calendar year and the Munich-based brand’s local subsidiary has sold 10,642 examples of the G20 and G1 3 Series in the past three years.

BMW Australia will offer the facelifted 3 Series Sedan in 320i, 330i, 330e plug-in hybrid and M340i xDrive variants, while the 3 Series Touring will be available solely in the 330i variant.

The facelifted 3 Series Sedan and Touring will arrive Down Under in Q4, with pricing and specification detail to be announced closer to the launch date.