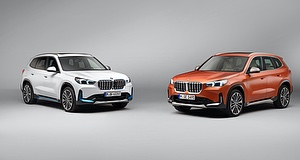 BMW Australia has confirmed that the newly revealed third-generation X1 and first-ever battery-electric iX1 will arrive in Australia late this year and during Q1 of 2023 respectively.

The importer says that although the small SUV’s pricing and specifications have not been confirmed yet, it will offer the sDrive18i and xDriver20i variants – equipped with TwinPower turbo-petrol engines and seven-speed dual-clutch automatic transmissions – in local showrooms toward the end of 2022, with the iX1 xDrive30 BEV to follow early next year.

What’s more, the new X1 range will be available with stylistic underride protection, M Sport exterior accoutrements and a range of alloy wheels 18 to 20 inches in diameter.

Inside, the X1 includes features such as a leather-trimmed sports steering wheel, dual-zone climate control, auto headlights and -wipers, four USB-C power and two 12V power outlets, and “a far greater number of driver-assistance systems compared with its predecessor”.

Furthermore, BMW will offer a range of restructured equipment packages that provide equipment highlights such as LED ambient cabin lighting, a panoramic glass sunroof and a premium Harman Kardon audio system to the model’s generous list of standard kit.

BMW says the cabin features new materials and a more spacious layout with many of the design cues taken from the iX battery-electric SUV that arrived in Australia late last year. The larger cabin sees the claimed load capacity increase to 540 litres (+35 litres) compared with the outgoing model, with up to 1600 litres of utility space (+50 litres) with the rear seats folded.

Both petrol powerplants are paired to BMW’s seven-speed Steptronic dual-clutch transmission as standard.

In the iX1 xDrive30 – BMW’s most compact battery-electric model – we find a dual-motor arrangement offering a combined output of 230kW and 494Nm. The all-wheel drive iX1 can accelerate from standstill to 100km/h in 5.7 seconds and has a stated driving range of 438km.

BMW has yet to publish dimensional figures for the X1, but says the new model offers a longer wheelbase and wider track than its predecessor, while also being lighter and offering better torsional rigidity than before. Various suspension enhancements and a new wheel-slip limitation device are also expected to be implemented. M Sport-enhanced variants will further adopt frequency-selective dampers, sport steering and a 15mm-lower ride height.

The curved 10.25-inch Live Cockpit Plus display – recently announced for the updated 3 Series – brings enhanced graphics, a more concise menu structure and BMW Intelligent Personal Assistant technology to the cabin alongside the 10.7-inch infotainment screen, which can respond to users’ touch- and voice inputs to “significantly reduce” the number of physical buttons, controls and switches presented to the driver and front passenger.

In addition, an indirectly illuminated smartphone tray with inductive charging takes centre stage at the front of the console; the technology is offered alongside BMW Digital Key Plus, BMW ID functionality and smartphone integration via Apple CarPlay and Android Auto.

A greater array of automated driving and parking systems are also offered in the third- generation X1, BMW says. These include cruise control with brake function, front-collision warning system, plus a parking assistant with an aft-facing camera and reversing assistant.

Further announcements relating to equipment, specification and pricing of the new BMW X1 and iX1 are expected later this year. The current BMW X1 range is priced from $47,900 to $56,900 (plus on-road costs).