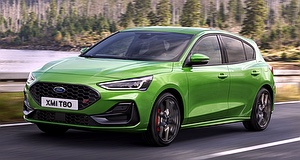 SUPPLY problems and stove-hot competition have forced Ford Australia to call time on Fiesta ST and Focus ST hot hatch less than 12 months after mainstream variants of the range were axed locally.

Sales of the models had dwindled to near zero as performance car buyers shopped elsewhere putting down their hard earned on more appealing, theoretically faster and sharper-priced cars from Hyundai, Subaru, Suzuki and Toyota.

Punters would not be blind to the fact that they can buy a GR Yaris Rallye… the good one, for a few grand more than the Focus ST-X. No prizes for picking which way the market jumped…

So, Ford Australia was up against it in the numbers game with its hot hatches. Prices were too high, sales of light and small cars have tanked in Australia, the competition offered more desirable, more powerful, newer cars with additional features for less or similar money and then the superconductor supply shortage in Europe hit.

What could possibly go “wronger”?

It was a perfect storm and 100 per cent the best time for Ford Australia to pull the pin on its unloved performance hot hatch range.

Even if they wanted to continue stocking these European built cars, there are none to be had as Ford Europe last week stopped taking Focus orders due to a near production halt caused by superconductor (chip) supply constraints along with bulging order banks.

The Fiesta is in a similar place of pain, possibly worse.

Ford Australia is putting on a brave face running up to the demise of these erstwhile iconic performance cars pointing out there’s still the Mustang for performance car enthusiasts. Ford says it is focussing (no pun) on areas of growing customer demand such as SUV’s commercial vehicles and electrification.

“Both the Focus ST and Fiesta ST have been segment-defining hot hatches for Ford Australia and have put smiles on the faces of enthusiasts across the country, and we want to thank those fans for their passion,” said Ford Australia president and CEO Andrew Birkic.

“But with semi-conductor-related supply shortages and our focus on emerging areas of growth, we’ve made the difficult decision to call time on these iconic hot hatches in Australia. We look forward to sharing more about the next era of our performance vehicle line-up soon.”

If you must have a Ford-branded hot hatch, you have a short window of opportunity as some stock remains in Ford Australia’s warehouse.

Ford says supply of around 40 Focus STs has been secured, meaning buyers may need to be quick to secure one of these disappearing hot hatches before they leave the line-up.

Regarding the Fiesta, a Blue Oval spokesman said, “Fiesta ST can trace its lineage back to the Fiesta XR2 (1981) and the dawn of the supermini era and it too will depart the line-up soon.”

Translated, that means they have a few in stock.

While Ford Performance fans will need to be quick to secure one of the last of these models in. Australia, Ford Australia says the line-up continues to offer great options for performance enthusiasts.

“The Mustang remains the country’s most popular sports car, and we’re preparing for the launch of the Next-Generation Ranger Raptor which sets a new performance benchmark for dual-cab utes in Australia,” said Mr Birkic.

Ford Focus ST, ST X and Fiesta ST owners will continue to be supported by Ford Australia with access to spare parts and maintenance.