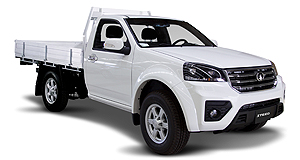 GREAT Wall has continued its re-establishment in the Australian light-commercial market by bringing a pair of single-cab Steed variants Down Under to sell alongside the existing dual-cab versions.

Pricing starts from $18,990 driveaway for ABN holders for the 4×2 version, while non-business owners will fork out $17,990 plus on-road costs.

Both single-cab drivelines will be motivated by the same 2.0-litre turbo-diesel unit underpinning the 4×4 dual-cab variants, which produce 110kW of power at 4000rpm and 310Nm of torque from 1800-2800rpm matched exclusively with a six-speed manual gearbox.

Great Wall offers a three year/100,000km warranty for the Steed to go with three years of roadside assist.

“Since we re-launched the Steed nameplate in 2016, we have received strong demand from dealers and customers for the return of the single cab version,” he said.

“With a mix of toughness, reliability and value for money, the single cab has always been a popular member of the Great Wall family.

“At its peak in 2012, the single cab version accounted for 55 per cent of all Great Wall utility sales.”

In its first full year of sales since re-launching in Australia with a factory-backed operation, Great Wall sold 404 units of the Steed, with 214 opting for the two-wheel-drive version and the other 190 of the 4×4.

When the 4×2 dual-cab variant was crash tested by the Australasian New Car Assessment Program (ANCAP) in September 2016, the Chinese ute only mustered a two-star rating.