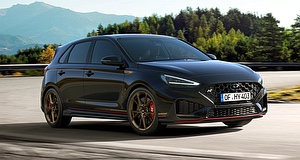 HYUNDAI has announced details of its limited-edition i30 N Drive-N variant.

The limited-volume hot hatch is distinguishable by its dark matte bronze forged 19-inch alloys, unique black badging and Drive-N livery, red interior accents and “extensive use of Alcantara”. From the total number of 800 units that will be produced, just 180 individually numbered units will be available locally

The Korean marque says the Drive-N limited edition variant was developed based on customer and media feedback and is available in two pearlescent body colours: Phantom Black and Serenity White.

Pricing for the model has yet to be announced, although it is expected that the model will command a slight premium over its derivative, which along with the remainder of the i30 N hatch range increases in price by $500 this month (see below).

Available with six-speed manual or eight-speed dual-clutch automatic transmissions, the i30 N Drive-N is identical in terms of its mechanical specification to the regular i30 N Premium with the same 2.0-litre four-cylinder turbo-petrol engine that produces peak outputs of 206kW at 6000rpm and 392Nm between 2100 and 4700rpm.

The cabin of the i30 N Drive-N is outfitted with a unique numbered plaque (depicting its position among the 800 units produced), plus Alcantara with red stitching (instead of  leather) on the steering wheel rim, gearshift and park brake boots and centre armrest.

Hyundai says all the interior’s decorative accents will be red in colour, including the seatbelts, steering-wheel N buttons, as well as the inserts and stitching of the N Light seats. The i30 N Drive-N limited edition also has variant-exclusive floor mats.

Australian deliveries of the limited-edition hatch are expected in the final quarter of this year – the i30 N Drive-N entered production last month (April). Hyundai Motor Company Australia (HMCA) says it expects 70 per cent of buyers to opt for the automatic version of the variant and believes that the majority of buyers will opt for white paint.

Pricing for the model has yet to be announced, HMCA saying simply that the model will attract a “small additional cost” over the i30 N Premium (sunroof) variant on which it is based. Fastback variants of the limited-edition model will not be offered locally.

With limited numbers available, prospective customers are urged to register their interest with their local Hyundai dealer as soon as possible.