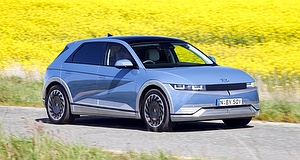 AN UPDATED Australian Hyundai Ioniq 5 range has been revealed with a revised two-variant range and slightly more affordable entry pricing – although there is a catch.

When the latest batch drops at 1pm on July 20, all 119 available units will be the pricier all-wheel drive variant, renamed the Ioniq 5 Techniq, which at $77,500 before on-road costs, are $2000 more expensive than the MY21 Ioniq 5 AWD.

These will be available across Australia except for the Northern Territory, with another batch comprising a similar number of vehicles expected to become available in August.

Estimated delivery times will range from four to six weeks depending on how quickly customers sign their contracts and pay in full, with the relatively quick turnaround being due to all vehicles being pre-built, with Hyundai promising a broad range of colour and trim options.

The extra coin brings Vehicle-to-Load (V2L) Inside and Outside, the former enabling occupants to run or charge appliances inside the car through a household-style three-pin 250V/15A or3.6 kW power outlet located beneath the rear seats, with power coming from the car’s 653-volt, 72.6kWh lithium-ion polymer battery.

V2L Outside, as before, features an external socket to operate camping gear or charge equipment such as electric bicycles and scooters.

Another new feature is an augmented reality head-up display (AR HUD) that appears to project turn-by-turn navigation arrows onto the view of the road, ahead along with key safety/status information in the driver’s line of sight.

However, the Techniq loses the Vision Roof (panoramic sunroof) from the standard kit. It will return as a $1500 option, though not until late 2022.

Also available later in the year will be entry level Ioniq 5 RWD models, which have been renamed Ioniq 5 Dynamiq and priced from $69,900 before on-road costs – $2000 less than the MY21 model despite gaining V2L and the AR HUD and retaining the Vision roof.

The outgoing model’s 20-inch wheels have been replaced with 19-inch rims, which Hyundai claims extends driving range by 30km to 481kms thanks in part to being shod with more efficient Michelin Primacy 4 rubber, instead of the French tyre maker’s Pilot Sport EVs.

The MY22 Ioniq 5 will retain all other features and specifications from the 2021 model, including the drivetrains, which include the Techniq’s 225kWh (70kW front + 155kW rear) Dual Motor AWD and the Dynamiq’s 160kWh rear motor set-ups.