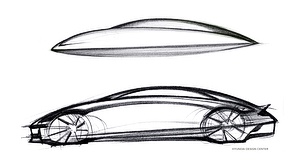 HYUNDAI Motor Company (HMC) has released an image that previews its forthcoming Ioniq 6.

The vehicle, which will be the second all-electric model in the South Korean brand’s Ioniq range, is shown in a single design concept sketch as a streamlined and low-slung coupe-sedan. Hyundai says the ‘6 incorporates cues from its Prophecy concept EV.

With clean, simple lines and a purely aerodynamic form, the styling of the “Electrified Streamliner” is said to reflect Hyundai designers’ “commitment to satisfy both aesthetic and functional needs of customers in the electric mobility era”.

The Ioniq 6 is based on HMC’s Electric Global Modular Platform (E-GMP) – the all-electric architecture that also underpins the Ioniq 5, Kia EV6 and Genesis GV60. Not only does it enable the new model’s stretched wheelbase; it facilitates its “optimised interior design”.

The E-GMP platform further allows Hyundai the opportunity to present its Ioniq 6 in two- and all-wheel-drive configurations and can facilitate a wheelbase in excess of 3000mm. The powertrain, which is paired to the dedicated scalable electric platform, utilises 800V technology and lithium-ion battery packs designed to support 200kW fast-charging.

“The E-GMP – the Electric Modular Platform – opens up a new era for Hyundai Motor Group, pioneering the development of electric vehicles (EVs),” HMC said in a statement.

“This dedicated platform is made especially for EVs. It comprises the chassis of the vehicle, including the battery, motor and power electric system, and its scalable wheelbase allows it to form the backbone of many different types of vehicles.”

Based on other examples of Hyundai and Kia BEVs that utilise the E-GMP architecture, the Ioniq 6 may offer a driving range in excess of 500km (WLTP), a battery pack of up to 77.4kWh capacity, a total system output exceeding 430kW/740Nm and a 0-100km/h time of around 3.5 seconds.

Hyundai’s 2020 Prophecy concept indicated the future design direction for the brand, while demonstrating the flexibility and packaging capabilities of the E-GMP.

It also previewed a number of technologies that may be realised in the Ioniq 6, such as integrated pixel-lamp head- and tail-lights, functional aerodynamic elements – including battery and cabin intakes and exhausts – and a cabin that creates a “lifestyle space of comfort and refinement”.

Not all of the Prophecy concept’s technologies are likely to reach production, however. Because it was designed to operate with high-level autonomous driving capabilities, the concept model featured a pair of joysticks in place of the traditional steering wheel!

It also offered a full-width digital dashboard similar to Mercedes-Benz’s latest-generation “Hyperscreen” MBUX system, which may or may not debut in the Ioniq 6.

Hyundai says it will release further images and information pertaining to the Ioniq 6 over the coming week.

GoAuto understands that the Ioniq 6 is scheduled for market introduction next year. After that, Hyundai will launch the Ioniq 7 seven-seat SUV.