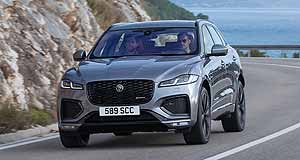 JAGUAR Land Rover (JLR) Australia has announced pricing and specification for its updated F-Pace large SUV range, which ushers in a new look inside and out, fresh powertrains and a revised model line-up that now starts from $74,990 plus on-road costs.

The updated line-up comes in at a slightly more affordable price point compared to the outgoing range ($76,952), while variant choice has been trimmed considerably to just five offerings, consisting of four petrol grades and one diesel.

Of those five variants, three will be powered by the newly introduced Ingenium inline six-cylinder petrol and diesel engines, made more efficient by the inclusion of 48-volt mid-hybrid (MHEV) technology.

Meanwhile the new D300 inline six-cylinder diesel pumps out 221kW/650Nm, which thanks to the MHEV system returns a fuel economy figure of 7.4 litres per 100km, while emitting 194 grams of CO2 per km. The diesel is a full second slower to three figures compared to the petrol.

All F-Pace variants are paired to an eight-speed automatic transmission, with power delivered to all four wheels through a rear-biased set-up that Jaguar calls Intelligent Driveline Dynamics.

From the outside, the new F-Pace is identifiable by its more aggressively sculpted bonnet, a larger grille, redesigned front bumper and air intakes, new LED headlights and a double chicane graphic for the tail-lights.

The all-LED headlights can also be optioned with pixel LED lights, which can adapt the lighting modules to mask oncoming traffic or road signs.

All Australian examples will come in R-Dynamic specification, which gives the F-Pace a more aggressive, sporty look.

Inside, Jaguar says the cabin has been completely overhauled, highlighted by a new floating 11.4-inch curved HD touchscreen (up from a 10-inch screen) projecting the latest Pivi Pro infotainment system.

The new system supports Apple CarPlay and Android Auto, offers Bluetooth connection for up to two phones, and can stay up to date with over-the-air software updates.

A full range of driver assistance technologies are on offer, with new features including clear exit monitor and a surround-view camera that offers a range of real-time viewing options when manoeuvring the vehicle.

While the launch range tops out at $109,150 for the HSE P400, it is expected that the hi-po SVR variant will also arrive at some point, underpinned by a 5.0-litre supercharged V8 that in the current version develops a meaty 405kW/680Nm.

To the end of August, JLR Australia has sold 229 examples of the F-Pace, down 41.9 per cent over the 294 units sold to the same point last year.