JAGUAR Land Rover (JLR) Australia has announced pricing for its updated Range Rover Velar luxury large SUV, with the slimmed-down range ushering in new engine choices and updated spec changes ahead of a local arrival in March next year.

It is a far cry from when the Velar range first touched down locally in 2017, where a staggering 48 variants were on offer for buyers.

The point of entry to the range has risen by $5353 with the removal of the previous entry-level variant, however the new base-level grade is actually marginally cheaper than the equivalent outgoing version.

Like many other JLR products, the Velar range will now be available with the new 3.0-litre turbocharged inline six-cylinder Ingenium petrol engine, which incorporates 48-volt mild-hybrid (MHEV) technology.

MHEV tech has also been included on the sole diesel variant, the mid-spec D200 grade which employs a 2.0-litre turbocharged four-cylinder unit producing 150kW/430Nm, allowing for a fuel economy figure of 6.3 litres per 100km and CO2 emissions of 165 grams per kilometre.

All variants employ an all-wheel-drive set-up with power channelled via an eight-speed automatic transmission.

There are no plans to re-introduce the 404kW 5.0-litre supercharged V8 from the outgoing range, with the SV Autobiography Dynamic Edition only featuring in the pre-update range as a limited-run model.

One of the biggest changes in the update includes the latest iteration of the Pivi Pro infotainment system, which feature enhanced graphics and responsiveness, integrated Spotify and over-the-air software updates.

Active Road Noise Cancellation has been included, which monitors vibrations from the road surface to calculate and deploy the opposite phase sound wave needed to remove the noise from the cabin.

JLR claims the tech can result in up to four decibels of noise reduction, which can help reduce driver fatigue.

A new cabin air filtration system has also been adopted, which can reduce the levels of particulates, pollen and odours entering the cabin, making for an even more serene experience.

All new Velar grades will come standard with the R-Dynamic specification pack which gives the exterior a sportier look, while top-spec P400 grades will feature air suspension as standard.

Exact local specification is yet to be set, with JLR Australia saying spec levels will be finalised next month.

To the end of August, JLR Australia has sold 399 examples of the Velar, marking a significant 49.4 per cent drop over the same period last year. 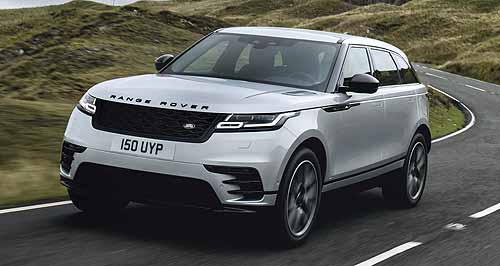 GoAuto can help you buy a new Range Rover Velar

This is an agreement between GoAutoMedia Pty Limited ACN 094 732 457 of PO Box 18, Beach Road, Sandringham, VIC, 3191 (“we/us”), the owner and operator of the GoAuto.com.au website (“the website”) and the person wanting GoAuto.com.au to provide them with a lead for the purchase of a new car (“you”).

By completing a New Car Lead Enquiry, you agree to the terms and conditions and disclaimers and acknowledge the policies set out below.